I am in the midst of reading Fahrenheit 451 by Ray Bradbury which I decided to read after seeing that the actor Michael Shannon was part of a new remake of the movie. It is a dystopian novel that deals with the themes of censorship and brainwashing, books have been outlawed because they get people to think for themselves. Sadly, these themes are very applicable to todays US political environment where we have a President that thinks the American public is as naive as the people who watched his television show, “The Apprentice” and he thinks they will believe all the lies he puts forth.

As an aside on politics and books and facts. I usually don’t mix politics and pleasures like wine. In the US, we are in such a state that not to acknowledge the atrocities going on is like not acknowledging a fault in a wine, it is glaringly there but you just ignore it. Politics are not as usual and I hope things change soon.

Books in wine can be very helpful in sorting through all the regions, grapes, soils, producers, quality of wine versus just a widely marketed brand and in the case of the Union des Grands Crus de Bordeaux 2018 tasting at the Drake Hotel a few weeks ago, a book can give a road map as to wines to try.

Bordeaux is a huge and historic wine region.  It can be intimidating to wade into. According to the French Wine Scholar Study Manual there are more acres of cabernet sauvignon and merlot grown in the Bordeaux region than in any other part of the world. With such a huge region how do you start sorting it out? The UGCB tasting had over 70 producers. Since we all do not have the tasting super powers of the wine experts how do you go about navigating the wines at a large tasting like that?

I found that that the book, 1001 Wines to Try Before You Die edited by Neil Beckett and published 2008 gave me a framework to go about tasting the broad diversity of wines at the UGCB tasting. The title sounds a bit morbid and it is already dated given the publish date of 10 years ago. The wines cited in the book are specific vintages from around the world. There are 107 entries for Bordeaux across the appellations. The entries are crafted by well-respected wine writers and experts so there is more to the entries than just “this is a great wine”. I thought that if these producers had produced a vintage to be note-worthy than they were producers “to know”. Even though a book like this is just a slice of vintages and wine, I thought from a quality perspective it was a great place to start.

Bordeaux  is a wine region that has a lot of lists to begin with. I think everyone’s first revelation about Bordeaux is that cabernet sauvignon based wines are found on the left bank in the Medoc and Merlot-based wines found on the right bank including Saint Emilion and Pomerol but after that it continues to get more and more complicated.  The iconic 1855 classification ranked 87 chateau based upon price at the time into 5 tiers called growths. The first growths included Chateau-Lafite-Rothschild, Chateau Margaux, Chateau Latour, Chateau Haut-Brion and later in 1973 Chateau Mouton-Rothschild petitioned to be included as a first growth and it was accepted. No wines from the right bank were included because at the time they did not have the same prestige. Even though this was not a qualitative list, the wines still today are collectors items, sought after and very expensive.  Several other lists arose, Graves established a list in 1953 of 16 properties and revised in 1959. The wines all fall within the Pessac-Leognan AOC and are called “Grand Cru Classé de Graves“. St. Emilion established a classification system as well in 1955 and it has been revised over the years and as of 2012, 74 properties are ranked for vintages 2006 through 2011. 2 were classified as Premiers Grands Crus Classés A Level Chateau Ausone and Chateau Cheval Blanc.

With all these rankings it is very easy to get confused, add to the fact that different chateau have merged with each other or split over the years so you have chateau with similar sounding names that reflect different wines. I found cross-referencing the wines in Neil Beckett’s book was a great way to have a quality road map to taste the wines at the UGCB tasting and as a guide going forward with the caveat that the wine world is so big, no list is ever complete. Here are just a handful that I tasted at the UGCB tasting. As is obvious by this post, I highly recommend buying this book. It is a great slice of top producers and top wines made by them that you may never get to taste but at least can be aware that they exist.

Stephen Brook cites the 1989 vintage as together with Haut-Brion and Laville Haut-Brion as producing the finest dry white wines of Bordeaux. It is a sauvignon blanc based wine with only 12 acres planted  with white grapes. According to wine searcher the average price is approximately $100.

Stephen Brook cites the 2000 vintage. The wine is named after Pope Clément V, the pope of Bordeaux in 1305. This same pope relocated the papacy to the town of Avignon and the origin of the Chateauneuf-du-Pape appellation. This  is one of the oldest properties in Bordeaux and is now owned by the well known négociant Bernard Magrez. Sipping Pape-Clément you literally are drinking history. The average price on wine-searcher is $113 bottle for the red and $143 for the white.

Neil Beckett cites the 2000 vintage. According to Beckett, “the property takes its name from Baron Hector de Brane, nicknamed Napoleon des Vines, who bought it in 1833, having sold Brane-Mouton ( later Mouton Rothschild) in 1830. The property is now in the hands of the Lurton family since 1925. Beckett calls this second growth wine, dense but elegant. The average price on wine-searcher is $75. The Margaux appellation is described as the most perfumed of the appellations on the Medoc but I think that Brane-Cantenac despite the youth of the 2015 is always a crowd pleaser.

I tend to think of Bordeaux as being a mix of large brands but there still are many families behind the wines . Stuart Walton wrote the entry for the 2000 Chateau Léoville-Barton. The Irish Barton family has been producing wines in Bordeaux since 1821 first at their Chateau Langoa property and then acquiring the 2nd growth Léoville estate. Stuart Walton calls the 2000 Léoville-Barton a career defining wine. Chateau Langoa is considered a third growth. In wine studies St-Julien is described as the most Californian of the Medoc appellations, I would describe it as an opulent, rich wine style. The fun part of the UGCB tasting was that both mother and daughter were pouring the wines. On wine-searcher the average price for the Léoville-Barton is $94 and for the Langoa $53. This is a case where perhaps the Langoa does not have the pedigree or the specific grapes of the Leoville-Barton but it is still the grape growing and wine-making skill in the wine for a prestige name in Bordeaux.  Jane Anson, the Bordeaux expert at Decanter Magazine, details the history of the original Leoville estate and the three chateaux, Léoville-Barton, Leoville- Las Cases and Léoville-Poyferré here.

There were plenty of other wines that I tasted, included Chateau Poujeaux from Moulis.

Stephen Brook wrote the entry and cited the 2005 vintage. It is a blend of cabernet sauvignon, merlot and other red grapes 10%. Brook describes it as a wine of impressing without having to impress and remarkable consistency. It has been owned by the same family the Theils since 1921. It is listed on wine-searcher for an average price of $35. Moulis is an appellation off the path of Paulliac and St Estephe yet it has similar characteristics and is a way to dip into quality Bordeaux wines without the huge price tag.

It is always a treat for me going to the UGCB tasting to be able to sample the Sauternes. My nickname for them are liquid sunshine and the history behind the wines goes back centuries. The problem is that I don’t necessarily gravitate to Sauternes on even a monthly or yearly basis but when I taste them it is a small indulgence. Even though they each have different personalities some a little less unctuous than others, some a little more citrus than others, some a little more apricot. Drinking a glass of sauternes is a small indulgence that every time I taste one, I tell myself I should taste it more often.

Tasting high quality sauternes are probably the most accessible wines at the UGCB tasting. 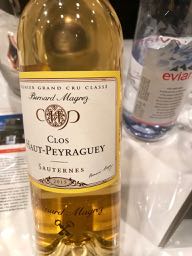 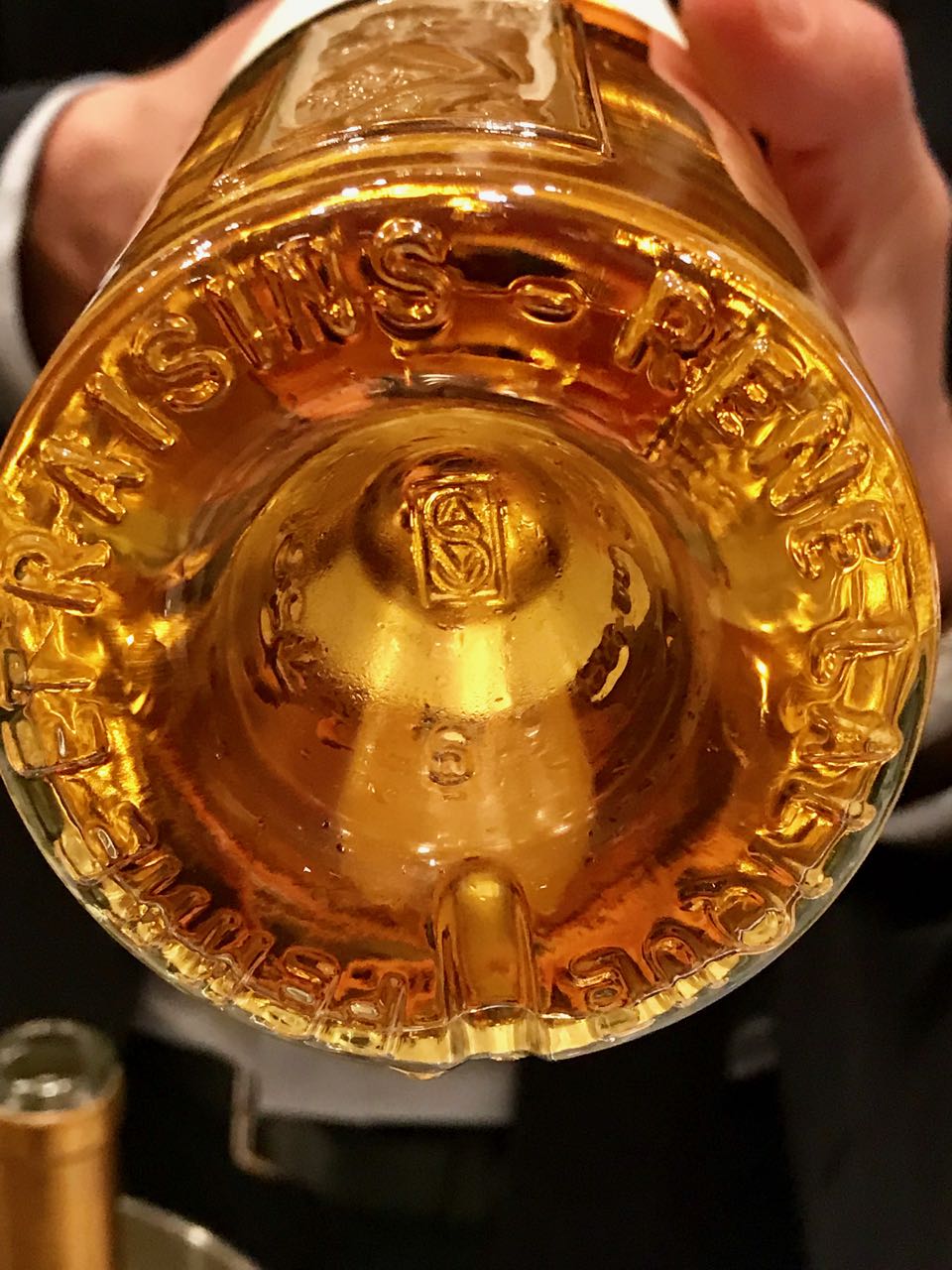 The Bordeaux wine world is huge and part of the fun for me at least in wine is learning the stories and the histories behind the bottles. I bought this book originally on a whim at Eataly in Chicago. But the more I read the entries the more helpful I find it is in sorting through the information on wine. It seems the most literature is always out there on the brands that have the most money to promote them rather than on quality. For me, this is a book that is is very helpful in sorting out quality and wines, again, with the caveat that it is just a slice of the wine world but a very fine slice it is! It is one of those books I will constantly go back to, to sort through Italian wines, to sort through Californian wines. You can look at this book as almost a treasure map of producers to find if you can afford them. Bordeaux like Burgundy is one of the pricier regions for wine because of all the history but books like this help you find bargain wine gems as well.