Other than visiting Bordeaux and making a trip to a chateau to taste their wine, one of my favorite events, that occurs once a year in Chicago, is when the Union des Grands Crus de Bordeaux makes a stop on its nationwide tour pouring wines of the new vintage, which this year was 2016. UGCB is an association of 134 Grand Cru chateau of Bordeaux. You can view the list of which chateaux poured in what city here.

Last year I reviewed the event on a historical level and brand name level. There is so much history behind all these wines that were poured it is hard not to. This year, since I have been working in an Italian wine department and dealing with consumers on a day to day basis, it got me thinking of Bordeaux’s influence on other regions like Tuscany and what four words would I use to describe a Bordeaux wine (Understanding that all the wines poured at this level are very complex and deserve far more than 4 descriptors) .

The UGCB publish a large guide on all the chateaux but I found their tasting booklet very helpful. Each section was highlighted with a map of the area. There are 60 appellations in the region which is overwhelming but only 14 regions were highlighted (since they contain all the grand crus – which is somewhat of a loose term in itself): Médoc, Saint-Estèphe, Pauillac, Saint-Julien, Listrac-Médoc, Moulis-en-Médoc, Margaux, Haut-Médoc, Pessac-Léognan, Graves, Barsac, Sauternes and right bank, Saint-Émilion and Pomerol. (Most links are to Bordeaux.com which has the easiest to access buttons and links, they link to the appellations sites as well). The afternoon was a bounty of wine. I focused on Sauternes, Saint-Julien and Pomerol but tried to stopped by and sample from some of the other tables. Moral of the story, drink more high quality Bordeaux in 2019!

The Bordeaux grand cru reds are so varied (and there are beautiful whites you can learn about on the UGCB site) that coming up with a title for this piece was a mashup of left and right bank. If Cabernet Sauvignon is the dominant grape (the cassis), Merlot is the dominant grape on the right (the plum) but then the ageing (cedar and tobacco applies to both), however, then you put Cabernet Franc in the mix and then Petite Verdot, Malbec and it is a horse of another color. That is what is so wonderful about Bordeaux, such variety but ,also, I was overwhelmed. Most, if not all, the wines we were sampling are babies and meant to age. However, they still were quite drinkable even if young. I tended to gravitate last year and this year to Saint-Julien.

Working with and selling super Tuscan wines, historically, they modeled themselves after Bordeaux and its blends. Napa, modeled itself after Bordeaux and its blends. Both these regions now produce unique wines to their own terroirs but at the same time they seek to be compared to the wines at the UGCB tasting. You can’t transplant the sea, the rain, the soil to another place. You can use similar barrels but even then, the barrels will respond differently after traveling a longer distance, etc. So again, other than traveling to Bordeaux, this was such a fantastic opportunity to taste the different terroir of Bordeaux.

Saint-Julien wines are described on Bordeaux.com as “intense and complex, notes of blueberry, blackcurrant, blackberry, plum, tobacco, and licorice”, “powerful and opulent, with very fine, velvety tannins”. The Wine Scholar Guild in their French Wine Scholar program describes Saint Julien as “the most Californian of the Médoc communes with wines that consistently deliver chocolate-covered cherry fruit”. Tasting the wines of Léoville-Barton, (86% Cabernet Sauvignon, 14% Merlot) Blackberry and Cassis, long finish with delicate not overwhelming tannins and a big mouthfeel realizing it was young and has long ageing potential. There are 3 Léoville wines from the original property. Léoville Barton, Léoville-Las Casses and Léoville Poyferre. Jane Anson at Decanter deciphers it all, here.  The labels on these top Bordeaux wines can be confusing because the original 1855 properties in the classifications have been subdivided based on marriages and sales of properties yet, of course, everyone wants to link to the original name in the classification yet maintain their name as well.

Oh Pomerol, oh Pomerol, how I do love your wines! Bordeaux.com describes Pomerol wines as aromas of “violet, red berries, truffles” and game and a taste that is “refined, powerful, intense, and sensual”.  The soils of Pomerol have iron oxide in them which adds to the color and texture. The varying blends of Merlot and Cabernet Franc for me had the violet and red berries with a texture of velvet. Sipping through these wines put me in a velvet cloud. I had forgotten how the wines yet again young were plummy but in an understated way with the cabernet franc adding that slight bit of tang and each wine had its own distinct personality.  I have never tasted Petrus or Le Pin who are located in Pomerol, but these wines are what the great Tuscan wine Masseto harkens back to.  I was quite happy tasting this group of wines from Pomerol below. 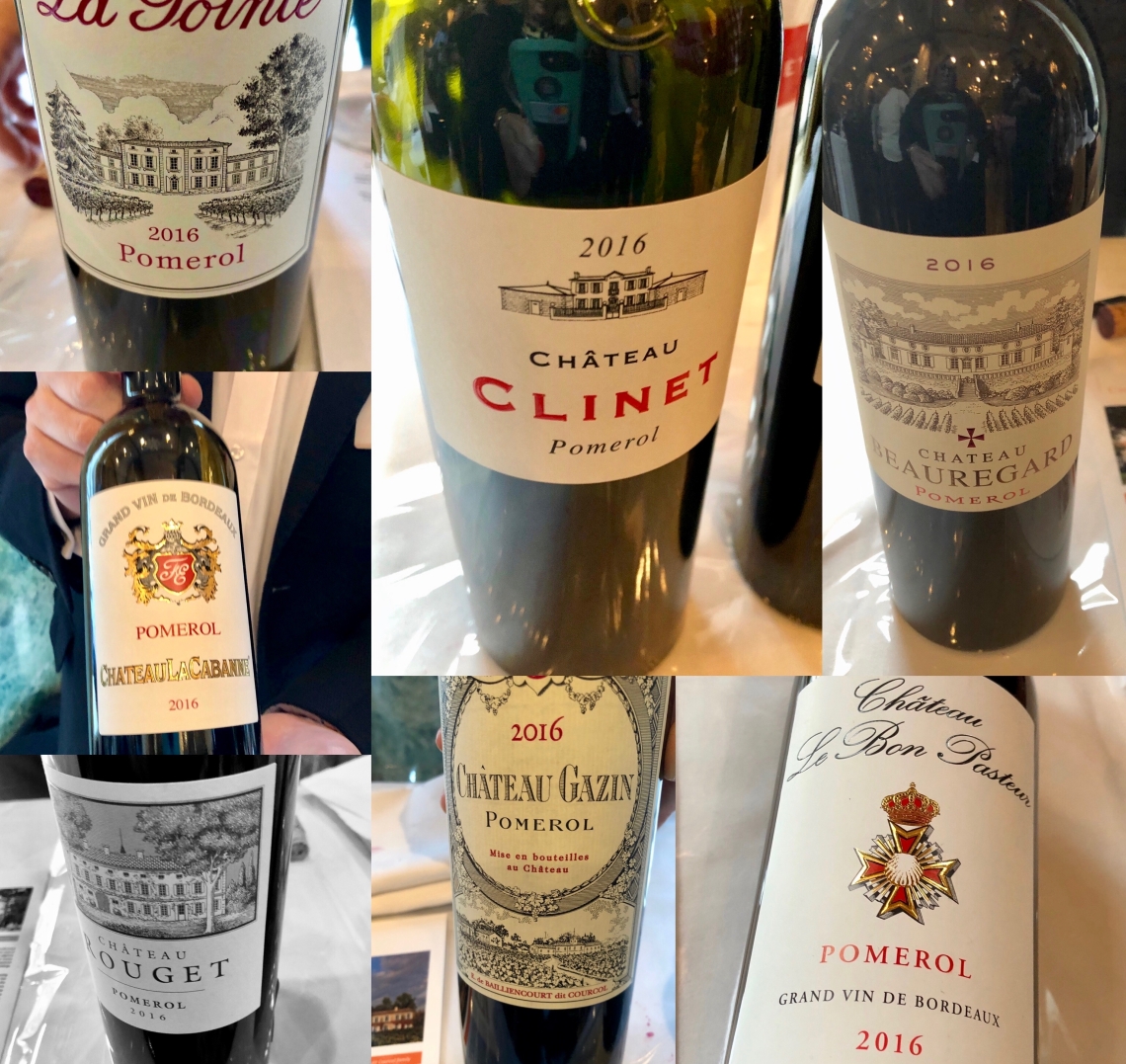 The Grand Tasting showcases the treasures of Bordeaux. There are so many lovely wines in the world but the history of Bordeaux and its wines is unsurpassed. The terroir is unique, and sipping these wines was the history and terroir of Bordeaux in a glass, Resolution, more Bordeaux like these cited in 2019!!! Cheers!