“We see everywhere the spread of a change in awareness concerning the horribly destructive effects of chemical products that have been used in agriculture over the past few decades. But how can we definitively get out of this impasse that has been, alas so neatly built up with the complicity, perhaps unconsciously, of so many chambers of agriculture? This is the question being asked today that is pressing ever more urgently: how can we get out of this nasty business? (Nicolas Joly, His Manifesto, Recovering The Lost Art of Agriculture)

Joly, is one of the pioneers of biodynamic farming, a farming practice, as well as a spiritual system, that is closely aligned with the teachings of Rudolf Steiner, the Austrian philosopher (1861-1925). Joly goes on to point out that stopping the use of chemicals is the first thing that vignerons and people look to do in their vineyards but they also must take into account how they relate to the universe that they are a part of and that everything is related to one another. Hence one’s actions in the vineyard must be in relation to the universe as a whole so everything is aligned and in balance and biodynamics becomes a way of life, the way the practice of yoga is a way of life for some people. Joly has been called the Godfather of Biodynamics in a piece about him written in Forbes by Tom Mullen.

This weekend is the weekend of the natural wine fair in Chicago, the Third Coast Soif . The Soif and the events surrounding it, bring natural wine makers, aka minimal interventionists to Chicago and some of the renowned pioneers of the natural wine movement like Frank Cornelissen and his wines of very specific terroir on Mt Etna.

“Our farming philosophy is based on our acceptance of the fact that man will never be able to understand nature’s full complexity and interactions. We therefore choose to concentrate on observing and learning the movements of Mother Earth in her various energetic and cosmic passages and prefer to follow her indications as to what to do, instead of deciding and imposing ourselves. Consequently this has taken us to avoiding all possible interventions on the land we cultivate, including any treatments, whether chemical, organic, or biodynamic, as these are all a mere reflection of the inability of man to accept nature as she is and will be.” (From Cornelissen’s site)

Natural wine is a broad category that includes absolute minimalists like Cornelissen trying to reflect their vineyards in the glass. It ,also, in some ways, is an age group category in terms of market, the shock of the new attraction versus the traditions of the old. However,  some of the natural winemakers are not so young as their audience and reference and use ancient winemaking practices. There are the natural wine purists like Cornelissen and then there is the broader category of natural wine. Although Zacchary Sussman of Punch, points out that wine does not necessarily make itself. Natural wine  (not all producers) supports organic practices in the vineyard (happy grapes) and minimal to no intervention in the cellar. Elin McCoy writes in Decanter Magazine about the rise of the natural wine movement and its direction towards the mainstream here.

All types of sustainable viticulture be it biodynamics, organic, natural wine,  remind me of the change and growth that yoga has gone through as it has become widely accepted in the world and in the United States. Yoga is a word most people understand today and recognize that it is good for your health and well-being. Yoga used to be a word associated with hippies, ashrams and new agers. Now yoga is a mainstream pursuit. Underneath that umbrella term, yoga, are many different practices that can get as detailed and as regimented and as spiritual as you are willing to go. From the highly regimented ashtangists, to the regimented but soothing hathists to the related groups that have been formed by individual yoginis like Dharma Mittra. Yoga is practiced in health clubs, at schools and in very specific studios where they follow very specific regimes and for some people yoga is a spiritual as well as physical regimen. It has ancient roots and common goals, physical and spiritual well-being of which breath-centered movement and meditation are just one of the limbs.

Sustainable viticulture is focused on protecting the earth and saving the land for future generatiions. It’s goals, some not all, are fewer to no chemicals in the vineyard and minimal intervention in the cellar and reduction of inputs but the details all depend on the path within this universe that that particular winemaker takes and then the viticulture and cellar practices that they are able and willing to follow given their business constraints, philosophical and spiritual beliefs, all in the pursuit of making a quality and authentic wine reflective of the terroir.

I was really happy to see that the winemakers representing PB (Planete Bordeaux), the largest AOCs in France, were here in Chicago at the Sofitel a few weeks ago, promoting their major sustainable initiatives for the wine appellatons. Bordeaux is a wine planet all its own, with 65 AOCs, 111, 000 hectares under vine, 327 wine merchant houses and 6500 AOC producers. PB was in Chicago to talk about its sustainable initiatives for the AOCs and introduce winemakers who represented and were involved in addressing those goals. 60% of millennials, 55% of Gen-Xers and 46% of baby boomers worry about harmful ingredients in the food they buy. (PB presentation). Food includes wine.

Living in a country where our current President does not care about the environment or believe in global warming, it made me so happy to see that Planet Bordeaux, representing such large appellations has sustainable plans in place to reduce inputs, conserve resources and take environmental concerns into account. In 2017, 60% of Bordeaux vineyards were under sustainable agriculture with the objective of 100% by 2020. The 20/20 climate plan includes reducing greenhouse emissions, usage of fossil fuels and water consumption by 20% and increasing the use of renewable energies by 20% all in the spirit of protecting the planet and producing quality wine.

The Bordeaux and Bordeaux Superier AOCs  (Bordeaux Blanc, Bordeaux Rosé, Bordeaux Clairet, Bordeaux Rouge, Bordeaux Blanc Supérieur, Bordeaux Rouge Supérieur and Crémant de Bordeaux) whom PB represents, are the largest AOCs in France. There are 20 bottles of Bordeaux sold per second in the world. 50% are sold in France and 50% are exported. Even within such a large appellation with these common goals, there are small winemakers producing wine organically, sustainably and reflective of the land the grapes are grown on. I was happy to meet some of them.

Île Margaux is one of the oldest vineyards of the estuary of the Garonne river grown without interruption since the 18th century. It is located in the commune of Margaux. When the Bordeaux wine classification was done in 1855, Ile Margaux’s vineyard was part of the property of Chateau Margaux. Over time the land was split off from the Chateau and bought by new owners yet retained the name. Since the beginning of the 21st century, it has been engaged in an ambitious sustainable development of the vineyards based on environmental quality. The Organic Certification process was initiated in 2011 and it has been certified organic since 2015.

The winemaker Pierre Favarel was at dinner with us and he told us that they tell time when they are on the island by the tides.   His wines were complex with vibrant fruit and it is very cool to taste a wine with the traditional blend of so many Bordeaux grapes. He was very passionate about organic but realistic at the same time of the difficulties being organic in a maritime area where the vineyards are susceptible to fungus. He said he hoped to eventually go the biodynamic route but that it took time to make changes in the vineyard and make quality wines at the same time. But his wines are poured at Beatnik in Chicago and distributed by Burke Beverage in Illinois. 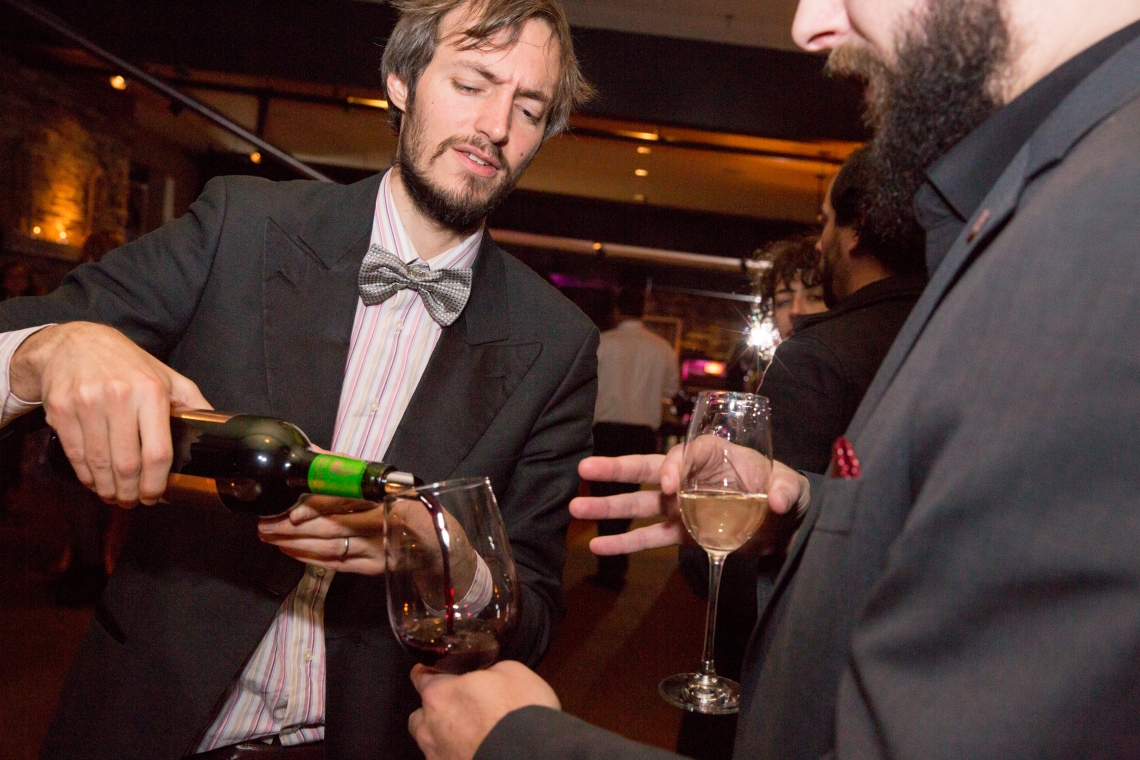 Here are links to several videos, 1) getting the wine off the island  and speaking about being in rhythm with the tide.

These were the other Bordeaux AOC wines poured that night all committed to sustainability.

One way to check if a wine is grown sustainably is by the labeling.

Domaine de L’Île Margaux will carry this label with the next vintage. But not all wines are labeled as clearly, some may have the AB logo on their back wine label, some have the Demeter logo that they are biodynamically certified. I will clarify this weekend and update this post but many of the natural wines do not have any labeling.

In an ideal world, I would love to be an ashtanga yogi, I was on the path for awhile and got through but did not execute the full Primary Series but life got in the way.  In an ideal world the best case would be for everyone to be as devoted and have the resources to grow grapes and make wine like Nicolas Joly or Frank Cornelissen but they serve as models for winemakers to aspire to. The important thing is that groups like Planet Bordeaux exist to encourage a movement in the direction of sustainability and winemakers like Pierre Favarel are moving their wines in that direction. The overall goal is to protect the earth, so that there is healthy soil and a clean environment to grow happy grapes and make quality wines to the best of these winemakers abilities reflecting the land and the area where the grapes originate. Some achieve this goal more than others. But that is the never ending fun part of wine is to appreciate the differences of each wine. So the next time you buy a bottle of wine, ask questions of the salesperson, go to the website, look at the back wine label, go to fairs like the Third Coast Soif. I know I will be looking for more of Pierre’s wine in Chicago now that I am aware of his domaine and have tasted his wine. I used to say when I worked at farmers markets that well cared for vegetables made for happy people but the same goes for wine.