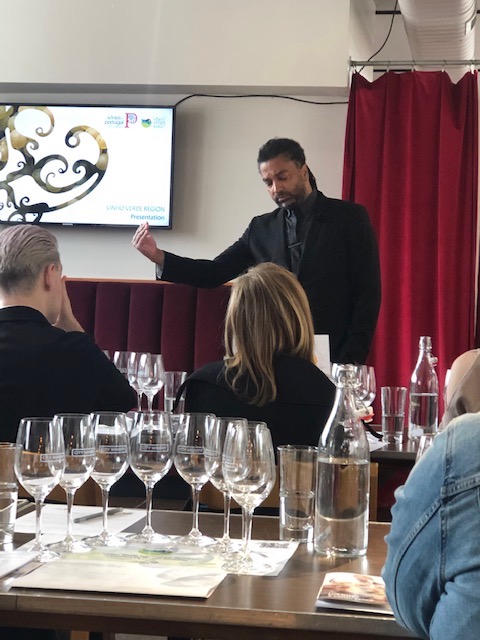 Like many people, I had a stereotype for what Vinho Verde wine was, an inexpensive, low in alcohol, slightly spritzy, light white wine that was great for what it was, a summer quaffer. I associated it with northern Portugal, bordering “green Spain” to the north, the Rias Baixas region. However, several weeks ago, Portugese sommelier, Bruno Almeda (and it seems a musician, a drummer, aka his name, “drummelier” on the gram) took us through a deep dive into the region of Vinho Verde and its wines during a seminar on the wines, held at City Winery Chicago at the beginning of May. It was clear from the get go, that the region of Vinho Verde produces so much more than just summer spritzer wines, and the area remains one of those “untapped” wine regions that has so many more wine types to offer than what hits the Chicago market.

Vinho Verde region – Where it is

The region of Vinho Verde is located ‘entre Douro e Minho”. It is located just south of the Minho river in the north, which is the boundary with the Spanish wine region of Rias Baixas and by the Douro river in the south, known for its iconic fortified Port wines. The Atlantic ocean is the western border and then to the east are mountains which then leads into the hotter, Mediterrean climate of the interior. Like Rias Baixas many of Vinho Verde’s regions are named after rivers. The Vinho Verde DO produces sparkling, white, red and rose wines. There are 45 allowed grape varieties and 9 subregions: Amarante, Ave, Baiāo, Basto, Cávado, Lima, Monçāo & Melgaço, Paiva, and Sousa. Already, the scene is set for grape and wine diversity. We tasted through 8 wines white with Bruno, and reds and roses were opened for the walk around tasting after the seminar.

The subregions: 1) Amarante – Located in the southeastern corner, it has higher than average altitudes, the hottest summers and is protected from the Atlantic so late maturing varieties grow here. Azal, Avesso (whites), Amaral, Espadeiro (reds).

2) Ave – Named after the Ave river, bordering the Atlantic this subregion is exposed to the ocean winds. The white Arinto and Loureiro grapes grow here, and include Traiadura, another white grape in its blends.

3) Baiāo – Just south of the Amarante subregion, in the east, Baião borders the Douro Valley and is known for white wines made from the Avesso grape (notes of orange, pineapple and peach).

4) Basto – North of Amarante, this subregion is the furthest inland, its summers are hot and favor late ripening varieties like Azal (white) and Espadeiro (red).

5) Cavado – North of Ave, this subregion also borders the Atlantic, and is named after the Cavado river. They produce white wines of Arinto, Loureiro and Traiadura.

6) Lima – North of Cavado, also bordering the Atlantic and known for whites made from Loureiro.

9) Sousa – Just west of Paiva, its further inland and at higher altitude so does not have as much of a sea influence and has more of a temperate climate. Reds made from Amaral and Vinhão, white blends of Arinto, Loureira and Traiadura.

As can be imagined, these subregions produce a variety of wines. Bruno took us through 8 wines after his run through of the region: 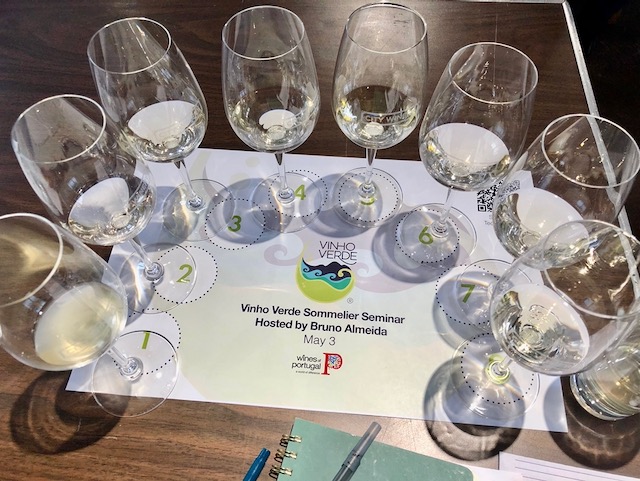 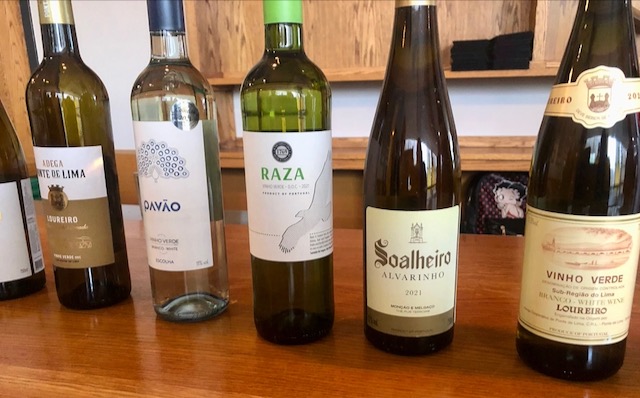 Sadly,, I had to leave right after the presentation to get to work so I didn’t have a chance to try the reds. My biggest impresssion was that there is far more to dive into in the region than even what we tasted. The price point of these wines is really low relatively to the quality. So my biggest takeaway don’t hesitate to try a wine from Vinho Verde and don’t assume it is going to be light, low alcohol and spritzy. These are fantastic wines for restaurant menus because they are food friendly wines and budget friendly prices. Yet another great morning, traveling by the glass to VInho Verde. Thank you to all who made this seminar happen!!