It’s been Prosecco week (7/20-7/26/20), a celebration of bubbles and as part of that celebration, I attended a virtual Zoom master class, given by the author and wine expert, Anthony Giglio, on Conegliano Valdobiaddene Prosecco Superiore DOCG.  This is a whole other Prosecco world than the type that most people pour into an Aperol Spritz. This is a Prosecco you want to sip on its own because it tastes so lovely. This is Prosecco Superiore DOCG. It all starts with the region and its hills between the communes of Conegliano (g silent) and Valdobbiadene, in the northeastern part of the Veneto region in Italy. The hills are alive with the sound of popping bottles of gorgeous Prosecco Superiore.

So lets zoom in (pun intended) on the specific area where the grapes are grown. First we look at Italy, then we move up to the northeast and the region of the Veneto and within that region you can spot the city of Venice and to the north of that the city of Treviso which happens to be the name of the province of that area as well. This is one of my favorite maps created by a site I can’t say enough good things about, Winefolly. (Buy their maps here) Note, that to the north of Treviso, the map shows mountains and lots of them, those are the Alps.

Staying in the northeast corner in the Veneto, just north of Treviso the city, in the dark green area is the growing region for Prosecco Superiore DOCG. The larger mustard green area is the growing area for Prosecco DOC which includes as you can see, a much larger part of the Veneto region and parts of Friuli as well. For comparison, the Champagne growing area is approximately 34,000 hectares. The growing area for the Prosecco DOC is 23,000 hectares. The growing area for Prosecco Superiore DOCG is 7000 hectares, a little less than 1/3 the size. Within the Italian appellation system, DOC stands for Denominazione di Origine Controllata, basically a wine made in a specific area regulated by a managing group, a consorzium. The extra G for DOCG, means Garantita, guarantee, which includes blind tasting and chemical analysis to approve its quality and typicity. So DOCG wines have to hold up to a higher standard than DOC wines and tend to be from much smaller growing areas.

Not All Prosecco is Created Equal

Then there are those hills……..

The hills of Conegliano Valdobbiadene Prosecco Superiore are so historical, beautiful, and distinctive that they were named a UNESCO World Heritage site in 2019. Grapes have been grown on these hills for centuries. The steep hills, called hogbacks, are particular to this area, and the vista is filled with hills, valleys, forests and small villages. The slopes have a checkerboard appearance due to ciglione, a type of terracing system using grass to reinforce the slope and prevent erosion. One of the historic planting systems, called bellussera, an overhead vine growing method which reduced disease gives a rhombus-shaped look to some of the vines. Between the steepness of the slopes which makes harvesting very difficult, the planting sytems and the small terraces, mechanization is virtually impossible and all vineyard management is done by hand.

Steep slopes are one of the secret ingredients to high quality grapes. Some of the finest wines in the world come from areas with steep slopes, the Douro in Portugal, the Mosel, the Wachau and Burgundy wines are all about the slope. Steep slopes create perfect conditions for wine grape growing, better drainage, lower yields, low nutrient soils, better luminosity (sun power) for ripening,

So not only is the area for Prosecco Superiore much smaller than Prosecco DOC but the steep hillsides are ideal conditions for growing high quality fruit. Within this Prosecco Superiore wine world, there are 15 communes (Conegliano, San Vendemiano, Colle Umberto, Vittorio Veneto, Tarzo, Cison di Valmarino, San Pietro di Feletto, Refrontolo, Susegana, Pieve di Soligo, Farra di Soligo, Follina, Miane, Vidor, Valdobbiadene) that are included within the DOCG and are represented by the 15 red squares in the Consorzio’s logo.

This Prosecco Superiore world is a huge world of top quality Prosecco unto itself.  Not only are there the 15 communes approved to produce wine, the next step of quality is the 43 Rives, which you can think of as “super vineyards”  that can be listed on a bottle label. These Rive can roughly be considered like Premier Cru in France. The top of the pyramid is the “Grand Cru” vineyard area, approximately 107 hectares, the Superiore di Cartizze. The last I read, 1 hectare in the Cartizze area was worth about 1.8mm euros, compared to about 1.2mm euros in Champagne. Once you enter this Prosecco Superiore world you may never want to leave.

The Grapes and the Method

The method for creating Prosecco is the key differentiating factor, along with the main grape, Glera, that distinguishes it from Champagne. Rather than the second fermentation taking place in the bottle and along with that, all the bread, cracker and brioche notes from yeast, Prosecco’s refermentation is in a tank. This method using a special tank called an autoclave, for the second fermentation, was invented in Conegliano, at the School of Winemaking there. This process is called the Italian Method or Tank (it can also be called the Charmat Method named after a Frenchman). The key feature of this tank, the autoclave, is that the pressure can be controlled, so sweetness and pressure can be monitored and it brings the cost of production down dramatically while not lowering the quality. One of the key notes of this style is the fresh, floral characteristics of the final product. When you are dealing with higher quality fruit to begin with, you want those delicate notes of the grape to come through in the final wine.

The second distinguishing characteristic of Prosecco Superiore is the grape, of which 85% must be the Glera grape previously known as Prosecco historically. The Glera grapes has notes of pear and apple depending on the soil and the vineyard. Using the autoclave, white flower aromas, acacia, wisteria and flavors of fresh pear, candied pear, bartlett and bosc come through on the palate. 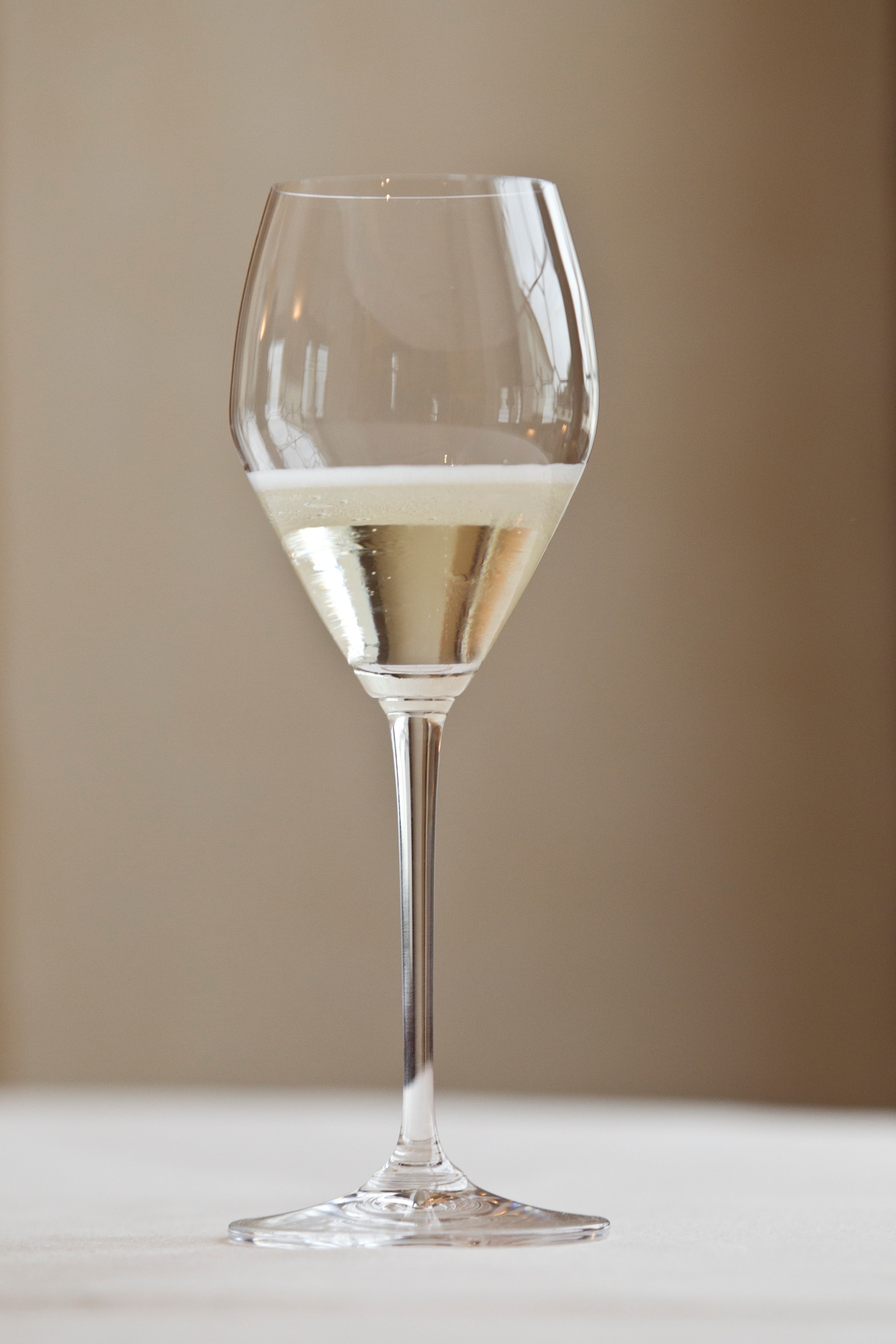 The final note, before I get into the wines that I sampled, are the residual sugar levels which will be listed on the label. Again, in this “other” Prosecco world, the sugar present in the wine is much more balanced by the acid in the grapes. There is no, almost powdered sugar-like after taste, the way there can be in Prosecco DOCs. The categories are Extra Brut (0-6 g/l), Brut (0-12 g/l), Extra Dry (12-17 g/l), Dry (17-32 g/l).

Bellenda Winery is located in the northeast corner of the wine region in the commune of Vittorio Veneto. They are committed to reducing their environmental footprint by not using weed killers, encouraging biodiversity, using recycled glass for their bottles and using solar energy for electricity among other things. The name of this wine, San Fermo comes from the name of a church adjacent to the vineyard. They use high wire training methods called Sylvoz. The wine had a unique honey character, one participant cited brown sugar, but I attribute the flavor to the 3 months on the lees before the wine was refermented. It was 11.6 % ABV, 6.5 residual sugar and 6 bars (a little less than 6 atms) of pressure.  I found this super fresh, bartlett pear, honey crisp apple and a touch of honey on the finish. 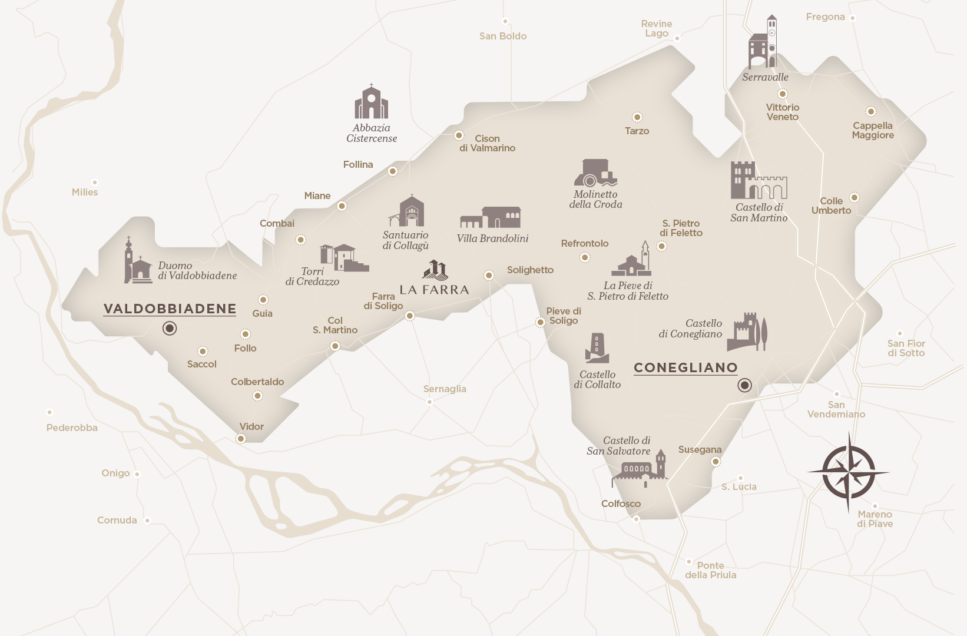 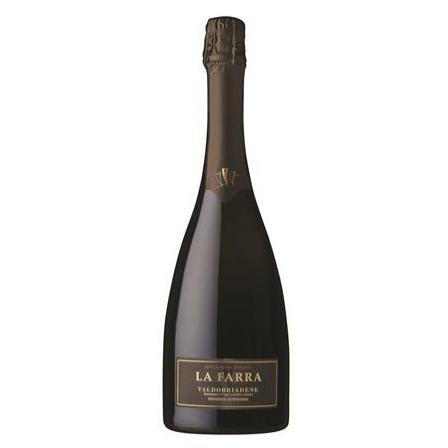 The grapes for the La Farra winery Rive di Farra di Soligo Extra Dry Millesimato 2019 are grown in the “Rive dei Nardi” vineyard on the upper hills of Farra di Soligo in the hamlet of Collagù. On the map above, La Farra is slightly lower left from the middle of the region. Even though this wine was Extra Dry it was very well balanced and I really didn’t notice the sweetness. Some bosc pear and honeydew melon.

Before I get into the back label and the certifications that this winery has gone through, lets get into how it tasted first.

The grapes are grown in Farra di Soligo and Refrontolo. It has 11.5% ABV, 10 g/l residual sugar and the soils of the vineyards are calcareous. This was my favorite of the 3 and mainly that it had the most delicate texture on the palate. The wine was full of green apple, bartlett pear and it had a soft but persistent mousse. Like all of the wines, freshness was a key quality. Maybe, I had not realized when I tasted it, it had to do with all the hoops the winery has gone through to produce chemical free, organic wines.

I could write a whole other essay about the back label of the Perlage Canah Brut. Their back label is a lesson on certifications. On the bottom left is their Codex Certificate: 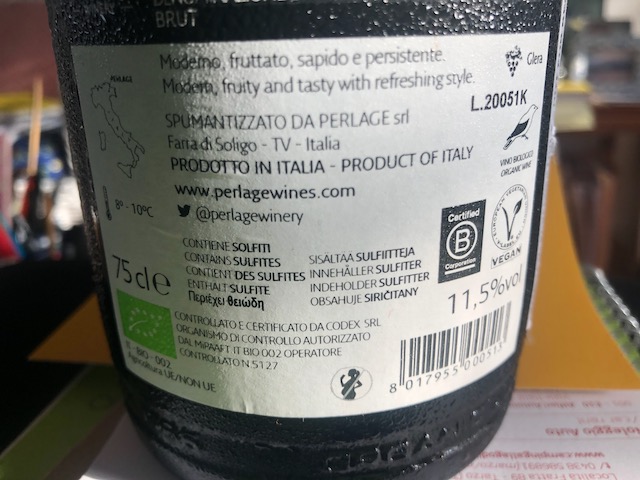 It develops principles and guidelines related to food import and export inspection and certification systems with a view to harmonising methods and procedures which protect the health of consumers, ensure fair trading practices and contribute to facilitating international trade in food stuffs.

The green leaf on the bottom left is their Demeter certification.

Demeter is the only ecological association that has built up a network of individual certificated organisations worldwide. Its basis is the Biodynamic agriculture method.

For the rest of their certifications you can go to the link here.

These guys are committed to doing what is best for the environment, for their customers and for the future. I think the fresh, pristine quality of the fruit came through in the delicateness of the wine.

As much as all this fine wine making (grapes grown on steep slopes, hand harvesting) and natural wine making ( avoiding use of weed killers, many organic, low impact to environment) goes into these wines, they truly are a bargain on the shelf.

So the next time you are in the mood for bubbles, all you have to remember is to look for the superior Prosecco, Prosecco Superiore DOCG! Salute!