Tiz the season for joy, and writing about beautiful places and wines and foods that I love is joyful for me. However, my time to write posts has been extremely limited since holidays mean more retail hours on the floor and more hours at the tasting bar. I have such respect and admiration for all those somms, wine students, wine writers at all levels, who if not supplemented by a working spouse/partner or family,  manage to pursue and pay for their studies and work in the industry.  This is a long-winded introduction, to the situation that lead me to really start digging into some of the native varietals on the shelf, that are not so well known, by the main wine-buying population, which means the bottle prices have not been driven up by consumer demand and are more affordable, like the red grapes, Schiava and Lagrein of the Italian region Trentino-Alto Adige.

One of the reasons that I started this site, is that when you have an authentically made glass of wine in front of you, there is so much more in the glass than just the wine. Perhaps it is all the yoga classes I have taken or the Reiki, but I do believe that the wine in the glass contains all the things that go into the very specific place where the grapes were grown.  When people walk into an Italian wine shop, where there are so many native grapes to choose from, and they ask for a well known varietal like Pinot Noir, (which has been planted there over the course of centuries), I of course direct them to the Pinot Neros, but quickly gage if they are open to alternatives. Ian D’Agata’s books Native Wine Grapes of Italy and Italy’s Native Wine Grape Terroirs are masterpieces of detail and a roadmap to hundreds of beautiful, authentic wines made with native Italian grapes. D’Agata gives the family tree of the grapes which is a key in understanding why one grape tastes slightly familiar versus another.

If I could, I would buy a different bottle of wine off the shelf every week, to try and taste and pair with food, so I could really have an opinion about the wine.  My wine curiosity still gets the better of me over being pragmatic about budgeting and I purchase wines that I see on the shelf that I want to try at home paired with food. There is so much variety with Italian wines it can be overwhelming but at the same time it is the fun part if you dig detail. The Trentino-Alto Adige region is a goldmine for delicious, reasonably priced wine and cheese as well and the lands are gorgeous as well.

Trentino-Alto Adige – Where is it?

I absolutely love this map of Italian wine regions by WineFolly, okay, I am a little obsessed by it. If you love it too, I encourage you to purchase it from their website.

The region of Trentino-Alto Adige is in the northeast corner of Italy.  The regions of Lombardy is to the west, Veneto is to the south and east, and the countries of Switzerland and then Austria are to the northwest and north. The northern end of Lake Garda, the largest natural freshwater lake in Italy, where the lake is surrounded by the Dolomite mountains, sits at the southern end of the province of Trentino and the town and commune Riva del Garda. The Adige river, the second longest river in Italy after the Po, originates in the Alps in the South Tyrol, close to the border with Austria and Switzerland and then runs south through the Veneto region to the Adriatic Sea. A very large section of the Dolomite mountains runs west to east through the entire region.

What this means is that the region is protected from the cold winds of the north by the mountains. According to a great article about the region on Vinepair, Alto Adige gets 300 sunny days a year. Vineyards are located mostly on slopes between 600 and 3300ft. What this means is that there is an exceptional high quality of grapes grown for the wines.

The South Tyrol, is the English name for Alto Adige. The name originated during the 12th and 13th centuries when it was a province of the Holy Roman Empire. However, it can be called several different names depending on the language you are referencing. In German, the area is referred to as Autonome Provinz Bozen – Südtirol, in Italian, Provincia autonoma di Bolzano – Alto Adige, and in the local language of the Dolomite peoples, Ladin (not a typo from Latin), Provinzia autonoma de Bulsan – Südtirol .

There are not many official wine appellations in Alto Adige, really it is divided by geographic area, Valadige DOC, Caldaro DOC (south of the town of Bolzano) and Altoadige DOC (the Südtirol), the latter being the DOC of the South Tyrol. The span of grapes grown include international, noble grapes like Pinot Noir, Cabernet Franc and Cabernet Sauvignon for reds, Chardonnay and the Pinots, Grigio and Bianco, German varieties, Riesling, Kerner and Müller Thurgau among them as well as native varietals which include the most widely grown red grape, Schiava and Lagrein.

Leave it to Wine Folly to have produced a profile on Schiava. Schiava is known as Trollinger in Germany, Vernatsch in some parts of the Alto Adige region and is actually a family of grapes. Wine Folly links its flavors to cotton candy ( something you might link to Beaujolais Nouveau) which I would not necessarily agree with in terms of flavor because Schiava is not sweet and sugary which are the flavors one associates with cottonh candy.  I do think it is very floral and has strawberry notes and reminds me of a relative of the gamay grape in Beaujolais, although there is no genetic link. As D’Agata points out, Schiava Grossa being the most widely planted in Alto Adige. What I like about the grape and the wines produced like that by Abbazia di Novacella, is that it is light bodied, floral, not overly tannic and can even be served with a little chill. It is a wine that went well with Thanksgiving fare and goes great with lighter eating which is my style these days. The fruit quality of the grapes in this region is high, so the wine though light still has great flavor and crispness, much like a Beaujolais Cru wine from Cote de Brouilly or Regnie. It pairs well with the cheeses of the region which are delicious as well like Alta Badia, a comte like cheese which is semi-soft, sharp and tangy. 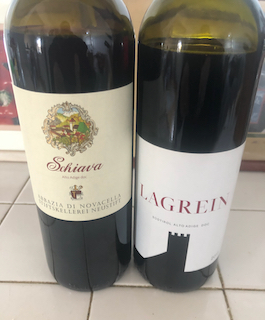 I would make the analogy that the grape Schiava relative to Lagrein is much like Pinot Noir to Cabernet Sauvignon. Whereas Pinot Noirs are lighter, less tannic, more delicate than the full-bodied tannic Cabernet Sauvignon wines, the floral, red fruit, soft tannin Schiava is much lighter than the darker, more tannic and full-bodied Lagrein. Lagrein has aromas of violets and the version produced by the cooperative Colterenzio (Kellerei Schreckbichl in German), composed of 300 small growers, is full of blackberries and notes of baker’s chocolate. The wine is aged for several months in concrete and wooden casks. The Colterenzio version still had a “mountain lightness” about it rather than being heavy and plodding. And Lagrein pairs really well with its cheezy counterpart, called Lagrein. Lagrein is a cow’s milk cheese that is steeped in the Lagrein wine and than covered with garlic and herbs. I highly recommend a pairing of the 2 Lagrein’s. 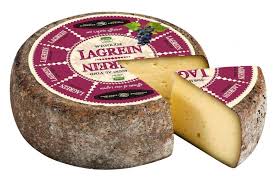 How can you not like a wine grown from grapes in a region that looks like this? And the price is very reasonable. Schiava and Lagrein are only 2 of the hundreds of native Italian varietals that grow across the 20 Italian regions. Drinking native Italian varietals is joyful and everyone needs to add some joy to their lives! Have a very happy holiday!!!