South Africa is one of those countries categorized into “New World” when it comes to wine but has been producing wines since the 17th century. The people who moved there had “old world” wine knowledge. When ships ruled the world, during the Age of Discovery (15th-17th century), sailors needed sustenance and scurvy prevention, fortified and sweet wines abounded in these boats, since they could survive the arduous ocean journey.  South African wine has its foundations from Dutch settlers of the Dutch East India Company who planted vines around the area of Capetown to nourish sailors on their voyage around the world.

Later French Huguenots fleeing persecution arrived and brought with them their winemaking expertise and vines.  They settled around the area of Franschhoek Valley (French corner) which is today one of 8 official wine-growing districts (Stellenbosch, Cape Town, Paarl, Tulbagh, Darling, Wellington and Swartland are the others) within the official Wine of Original System (largest to smallest – GI Geographical Area, Region, District, Ward) established in 1973. Like most wine appellation systems, Franschhoek Valley District is nested within the Coastal Region (Cape South Coast, Breede River Valley, Klein Karoo, Olifants River, and Boberg are the other regions). The Coastal Region is nested within the Western Cape Geographical Area ( Northern Cape, Eastern Cape, Kwazulu-Natal, Limpopo and Freestate are the other areas). For WSET and other wine tests is it is helpful to know these things.

For a long period the cooperative which still exists today, KWV, completely controlled the wine industry due to economics and the collapse of the wine market at the beginning of the 20th century and this continued until the abolishment of apartheid in the early 90’s. Since then there has been a growth of old and new wineries and wine regions.

For the most part (with wine there are always exceptions) the key wine growing areas and wines reside within the Western Cape and specifically the districts of the Coastal Region and the Cape South Coast Region. The oldest wine producing area is Constantia which is now a ward within the Cape Town district. During the 18th century Vin de Constance, a dried grape wine made from muscat à petit grains flourished (back to those sailors and ships). The demand for this wine ended as vine diseases took hold towards the end of the 19th century and favorable tariff treatment by the British ended.

After KWV’s grip on the wine industry was loosened and apartheid ended, a new south african wine industry took hold including the establishment of SAWIT (South African Wine Industry Trust) in 1999 that focused on empowering black workers and sustainability in  the wine industry. SAWIS was established in 2002 which focuses on quality certifications.

Of the wine growing areas Jim spoke about, Swartland in particular and Hemel-en-Aarde (Walker Bay District) piqued my interest because of the wines they are making. Hemel-en-Aarde due to the influence of the Bot River and the diversity of its soils,  Jim called “South Africa’s Burgundy” and true to the name it is an area known for pinot noirs and chardonnays. look for them on shelves and at restaurants. Hamilton-Russell were the pioneers of the area. A post on Hemel-en-Aarde is on the back burner for another day. But the front burner region for me is Swartland. 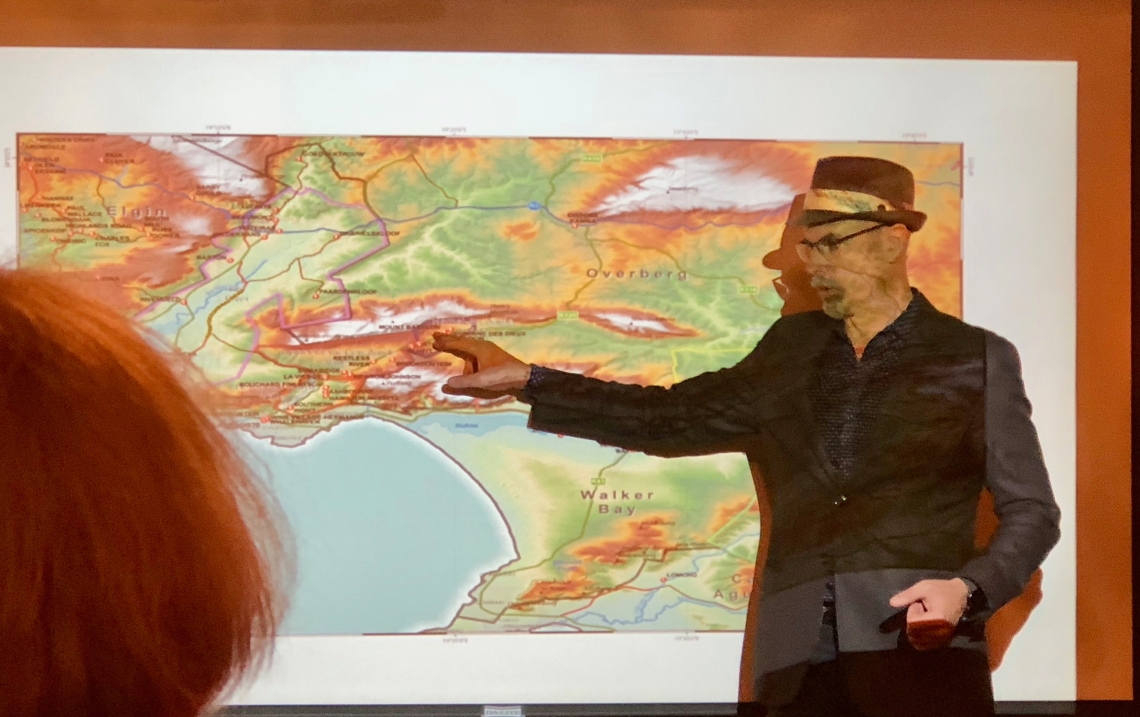 Now to the Swartland, a large area north of Cape Town filled with flat plains surrounded by mountains. The name is derived from Dutch, “black land” named after a prominent black bush that grows in the region. In researching the Swartland, I came across this comprehensive article by Tim Atkins, MW who has visited all the producers. His piece was written in 2013 and he calls it a revolution in wine. Gosh, 6 years later, news of the Swartland is trickling down to me. 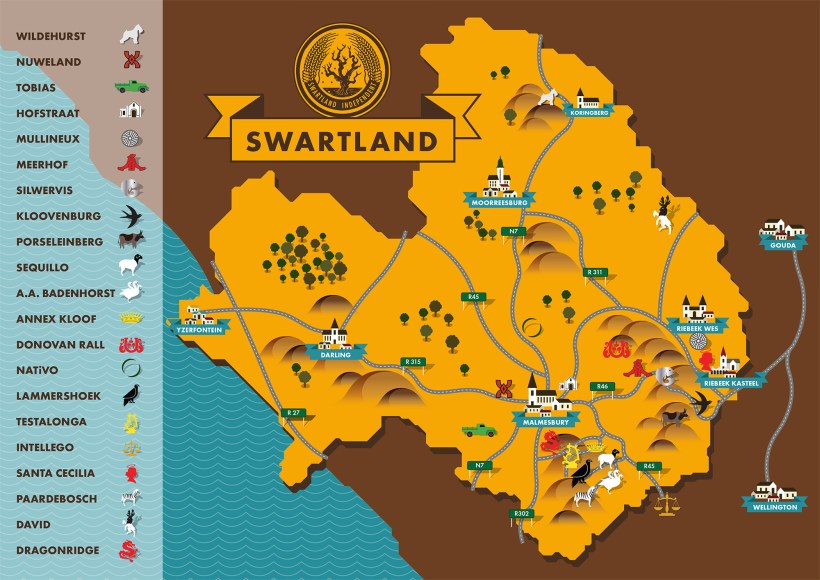 Charles Back, who started the Rhone varietal and Mediterrean grape blends, Goats du Roam wines at his family’s Fairview winery in Paarl in the early 80’s, looked at the Swartland as a place to grow grapes more cheaply. He hired Eben Sadie as his winemaker for this project called Spice Route. As things go in wine, Eben Sadie eventually left and started his own winery and vineyards, Sadie Family Wines. Sadie’s top cuvees, which have cult status now, are Palladius Swartland, a blend of Chenin Blanc, Grenache Blanc, Marsanne, Roussanne, Viognier, Clairette, Palomino, Sémillon, Sémillon Gris and Verdelho and Columella Swartland ,typically an 80/20 Syrah and Mourvèdre blend. The producers formed an association, The Swartland Independent Producers  which if you go to the link, has its own code of growing principles and requirements for grape growing and wine production in the Swartland.

As Jim explained, the Swartland is huge, it gets very hot in the plains and the vineyards are on the slopes of the mountains. Wine-searcher does a good job describing the area here. Chenin Blanc which survives heat well and Rhone style varietals are planted. Interestingly, and I will agree after tasting the wines, Chenin Blanc grown here, does not have the lanolin-like texture that it does in the Loire. Producers to look for, besides Sadie Family Wines, on shelves and restaurant menus are A. A. Badenhorst Family wines, Mullineux Wines and Donovan Rall of Rall Wines. Craig Perman of Perman Wines in Chicago, after his trip to South Africa a few years ago, came back a big supporter of Rall Wines and Joanna Breslin of Plum Market, who has visited South Africa extensively, is a big supporter of Rall Wines as well. To me, the Swartland compared to the more traditional districts of Stellenbosch and Paarl is somewhat analogous to the Sonoma Coast of California (perhaps Mendocino as well) to old established wineries of Napa.

In the seminar, we tasted Badenhorst,  Chenin Blanc label Secateurs 2018 . Kelli White at Guildsomm wrote an extensive article on old vine preservation across the new world , which includes South Africa. Badenhorst has a range of old bush vine wines. South Africa has a huge project focused on preserving old vines, Although there is a diversity of grapes grown in the Swartland, a large majority is devoted to Chenin Blanc which includes old vines (vines 35 years and older). This organization started by Rosa Kruger has this intention.

Joanna Breslin at Plum Market Chicago was really helpful in finding some wines for me. I have not gotten through all of these but am looking forward to it. Spending so much time in Italian wine (and loving it) it is fun to learn about other areas of the wine world that have interesting developments going on. I think I have only just started to explore Swartland wines let alone South African wine.  For Rhone varietal lovers and Chenin Blanc lovers, the Swartland is worth seeking out and trying either from a retail shelf or a sommelier recommendation and then contrast and compare. I look forward to learning more and sipping more South African wine and more Swartland wine! Cheers!

Most of the sources I have used I have linked directly to in this piece which includes producer websites, Guildsomm article and their South Africa Study Guide , MW Tim Atkins’s article and of course, Wine’s of South Africa website. Here is the link to the Old Vine Project, the Swartland Independent Producer’s site and SAWIT and SAWIS.