I had forgotten how big the hills of the Langhe were,  as our compact bus managed the hairpin turns, one after another, as we headed up to the town of La Morra (a Barolo commune) with some of my companions, on this Moscato D’Asti Consorzio Immersion trip, oohing and aahing as they looked out the window at the valley below. We were headed to Palas Cerequio, a Barolo cru resort designed and built amidst the vineyards owned by Michele Chiarlo and family.

On a previous trip to Piedmont, my friends had stayed at the resort, while I stayed up in the village. I loved the walked down on the tiny road amidst the vines. The resort looked very understated from the road and the view of the Langhe hills was spectacular.

For this trip, our bus made its way in the gathering dusk, up and through the narrow streets of La Morra and slowly down the narrow road leading to the resort set amidst the south-facing historical Cerequio Cru ( or MGA – menzione geografiche aggiuntive) vineyard.

Stefano Chiarlo, the winemaker, greeted us on the terrace as it began to mist and talked about his family, its winemaking history and the resort.

Stefano’s great grandfather Pietro started out as a farmhand at a winery in Canelli at the turn of the 19th century.  He and his brother replanted vineyards in Calamandrana (where the winery is located still today) a town between Nizza Monferrato and Canelli. In 1935, Michele Chiarlo was born, Stefano’s father. Michele enrolled in winemaking school in Alba and some of his classmates included Renato Ratti, Eno Rivella, Franco Ziliani, Giuliano Noè and Giacomo Tachis. Meanwhile Pietro Chiarlo rose to leadership of the Cooperative in Calamandrana.  In 1956, Michele Chiarlo started his focus on choosing the right vineyards to produce quality wine. His first Barolo bottling was 1958.  Through the 1960s, Michele focused on cultivating wine buying relationships abroad. In 1972, he expanded and built a larger winery in Calamandrana and continued to focus on acquiring quality vineyard parcels. In 1974, he was the first to create a Barbera D’Asti using malolactic fermentation and raising the quality of the Barbera wine produced. In 1987, he was a founding member of the Consorzio Grandi Vini, a supra-regional association of Italian wine producers. In 1988, he acquired parcels in the Cerequio Cru in La Morra and in Cannubi, the most historic vineyard of the Barolo region. In the 90’s, Michele’s sons join the winery, Stefano in viticulture and winemaking and Alberto in sales and marketing. One of the Chiarlo’s most prized acquisitions came in 1995, when they bought Tenuta La Court, a 20 hectare estate in the heart of Nizza Monferrato producing what they consider “super Barberas” and they along with Coppo winery were instrumental in seeing the formation of the Nizza DOCG designation (2014) for 100% Barbera, a sub-region within the Barbera D’Asti DOCG. The gorgeous Palas Cerequio was built in 2011 set amid the Cerequio vineyard.

Here is a map to give some orientation of where these communes are. All these towns are within 1 hour or so of each other. The town of Asti is to the north, I circled Calamandrana in purple which is quite near the Moscato D’Asti epicenter of Canelli and the Barolo communes are towards the Southwest in this photo.

Stefano emphasized their focus on sustainability in the vineyards preserving the water, air and the land. Later Alberto mentioned the same thing when he spoke about their wines during our cellar tasting. 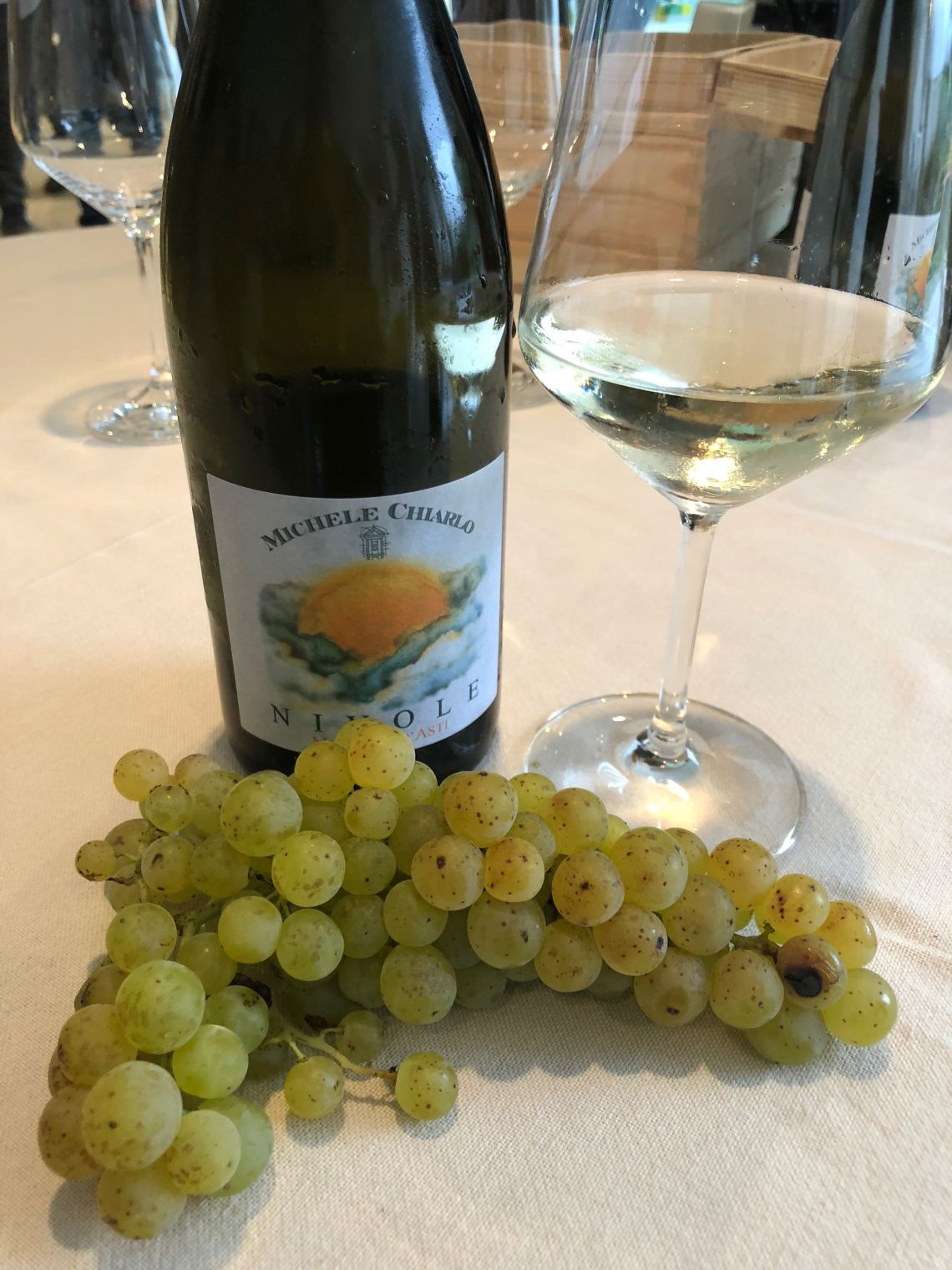 Stefano took us inside to taste their Moscato D’Asti DOCG Nivole. The Chiarlo’s have obvious roots in Moscato D’Asti wine, their great grandfather worked in Canelli and their winery is quite close to the best Moscato D’Asti vineyards. The 2017 vintage was smaller and the harvest took place 3 weeks earlier than usual. As we sipped the fresh, delicate, fragrant wine with riffs of peach and apricots, their chef, Vincenzo La Corte, gave a cooking demonstration using their Moscato D’Asti to make a zabaione. The custard was that yellow because he was only using the yolks of the eggs and a lot of them! In Italy, food and wine are always intertwined which I love! 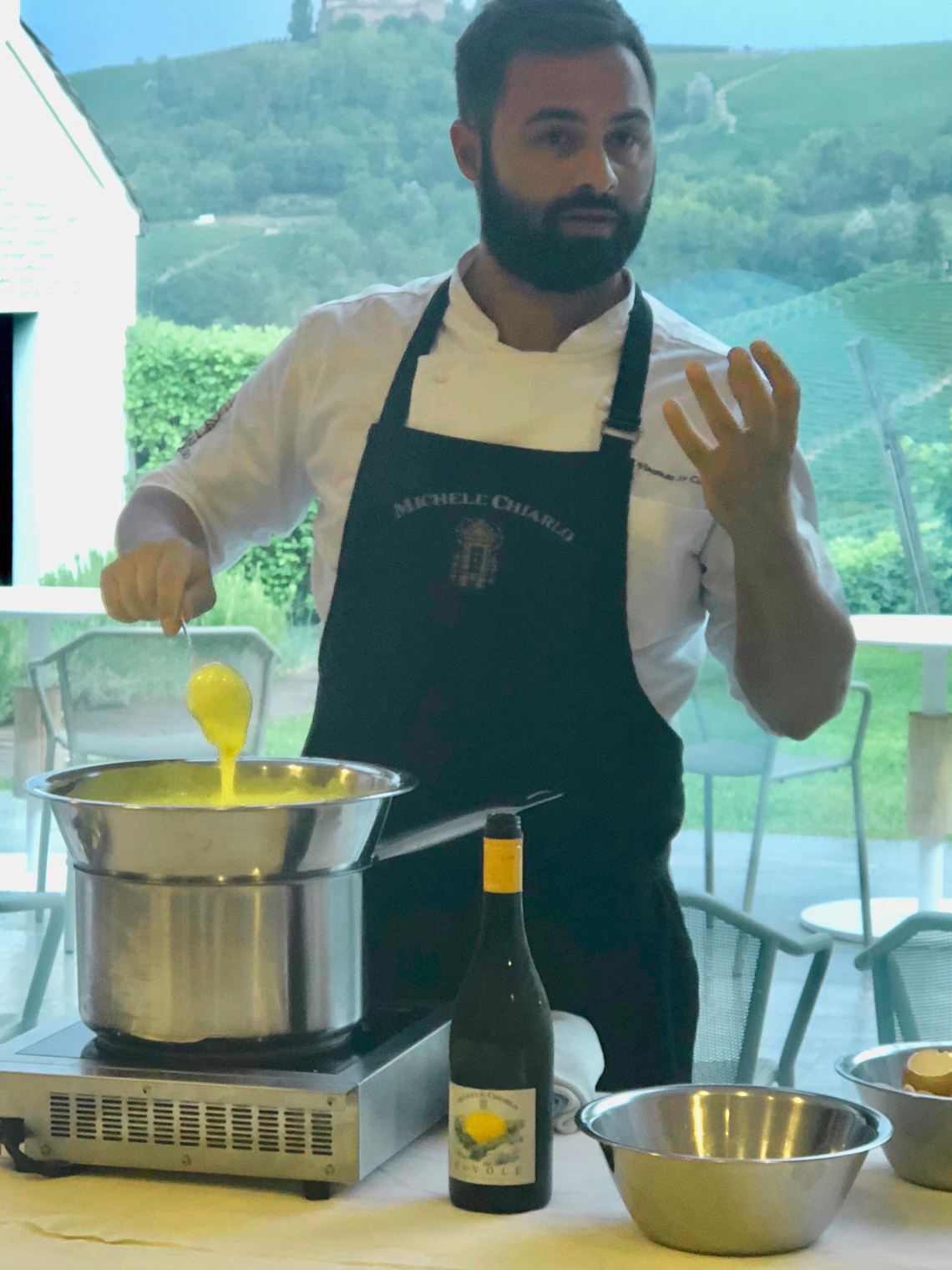 From this great welcome we proceeded down to their wine library for more tasting. 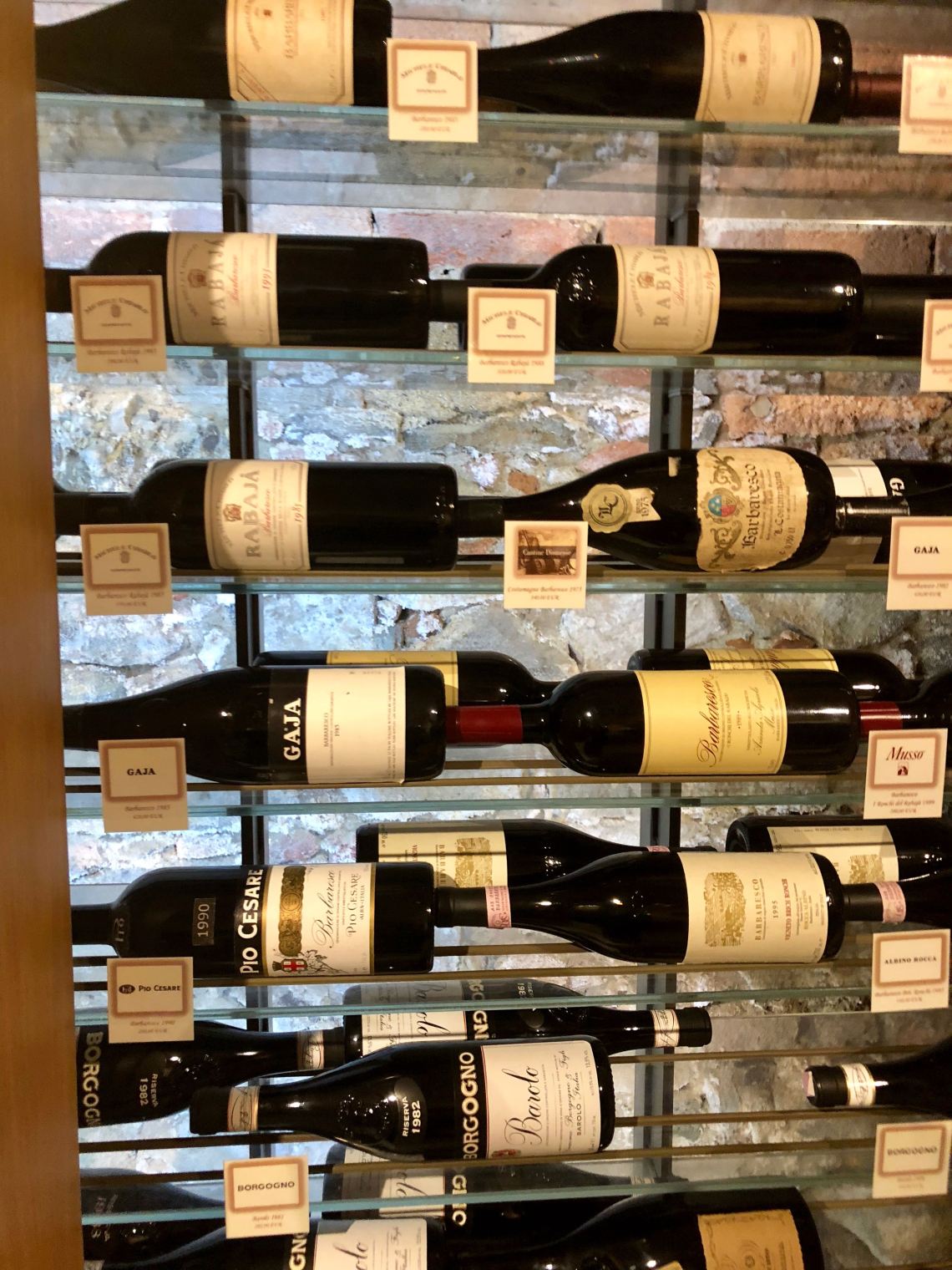 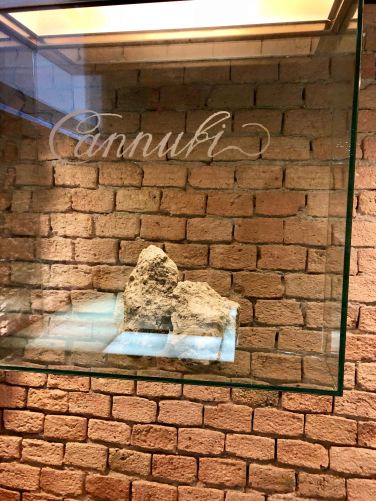 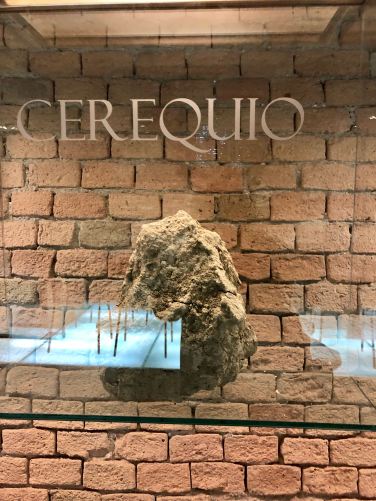 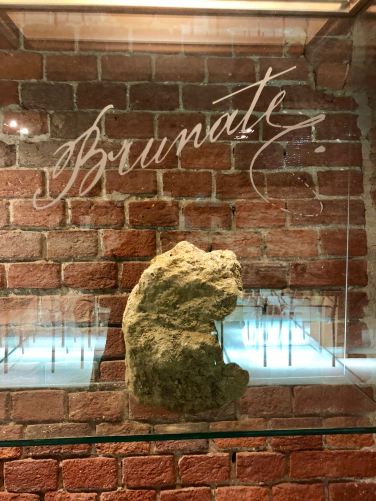 The different soils of the crus, Brunate, Cerequio, has a blue-tinged, Tortonian calacareous clay rich in magnesium and historic Cannubi a combination of the quartz, sandstone Helvetian soil and the Tortonian soil. 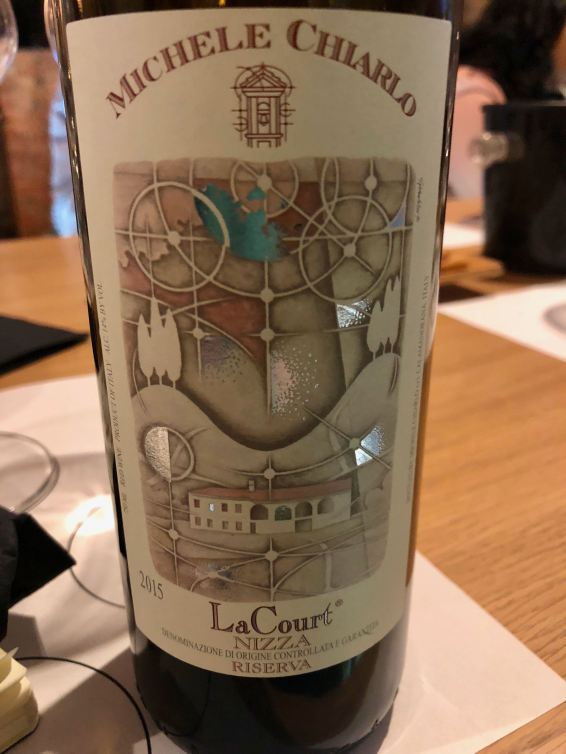 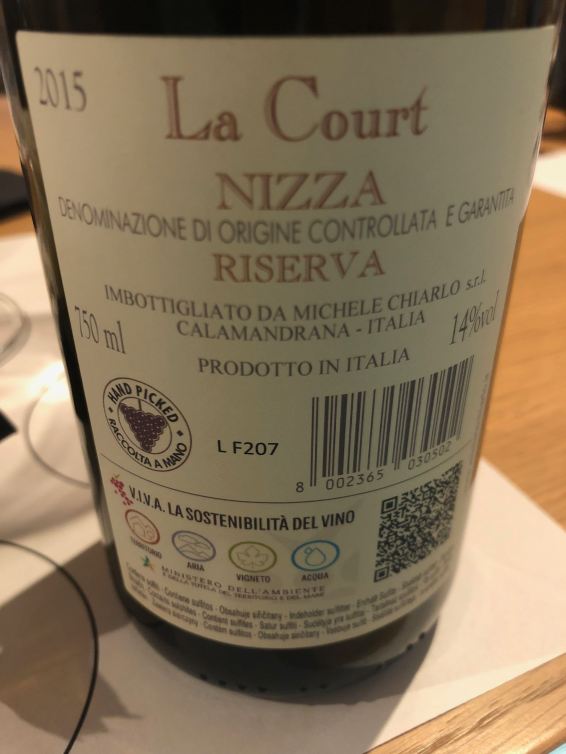 Then we preceded to the tasting. First up, their prized La Court Nizza DOCG  Riserva 2015. Alberto said that 2015 was a 5 star year for Barbera and so was 2016. The wine was ruby red, black cherry, coffee aromas, more cherry, fig and pepper on the finish. The wine is aged 50% casks and 50% large barrels for a year and then 18 months in bottle. This was a formidable wine and much more concentrated fruit and firmer structure than other Barberas. We tasted a 2013 vintage as well that Alberto characterized as a gastronomical vintage, chocolate, sweet spice, porcini mushroom. He said that because of climate change, the vintages of Barbera are getting better and better. The biggest differences between Nizza DOCG and Barbera D’Asti DOCG, Nizza requires 100% barbera grown within 18 communes, southeast and southwest facing vineyards, it is aged longer, 14 months and 30 months for the Riserva and ABV 13%.

Then as we moved into Barolo, Alberto pointed out there are really 3 stages of Barolo, 0-8 years, 8-15 and then 15 and beyond and that time is a friend to Barolo. We did a comparative tasting of Cerequio from 2013, 2010 and 2006. The 2013 had strong aromas of licorice and rosemary, the 2010 was dried roses and the 2006 was distinctly eucalyptus, mint and dried roses. It was very remarkable the very noticeable differences. Michele Chiarlo Cerequio Barolo DOCG 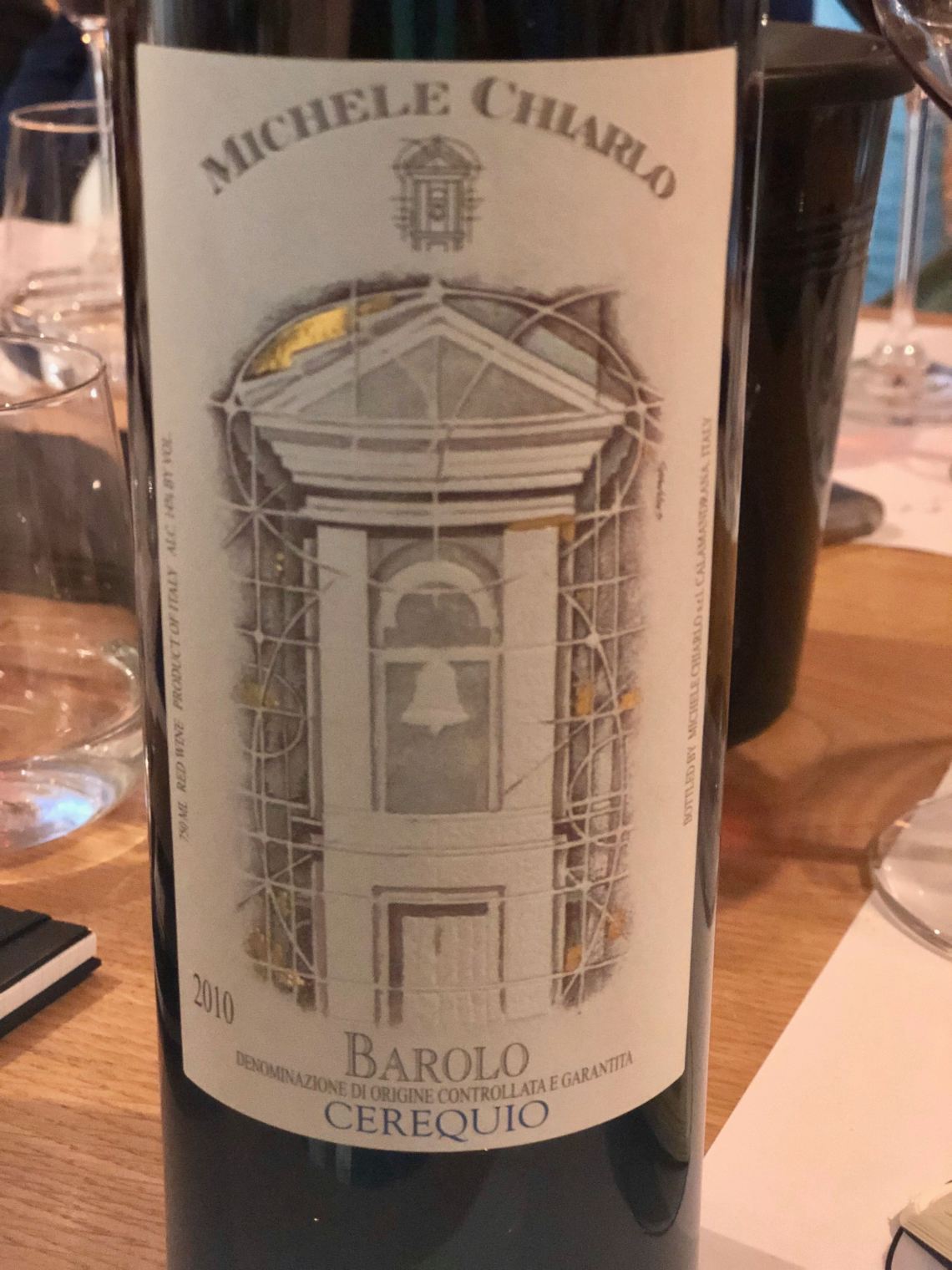 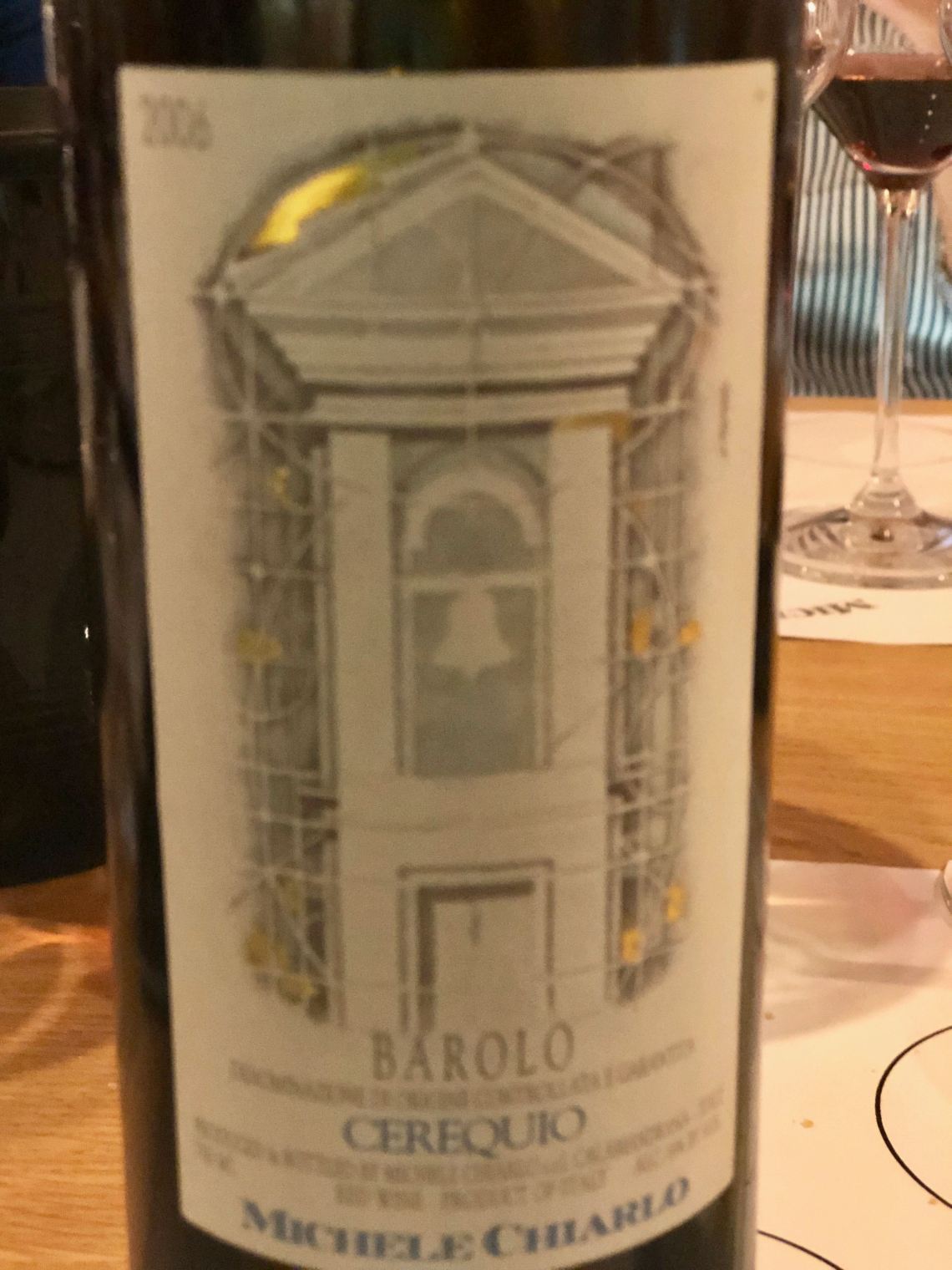 As we moved back upstairs for dinner prepared by Chef La Corte, it was a family affair. Stefano’s wife and daughter stopped by. Alberto lead another animated discussion on the wine and food. 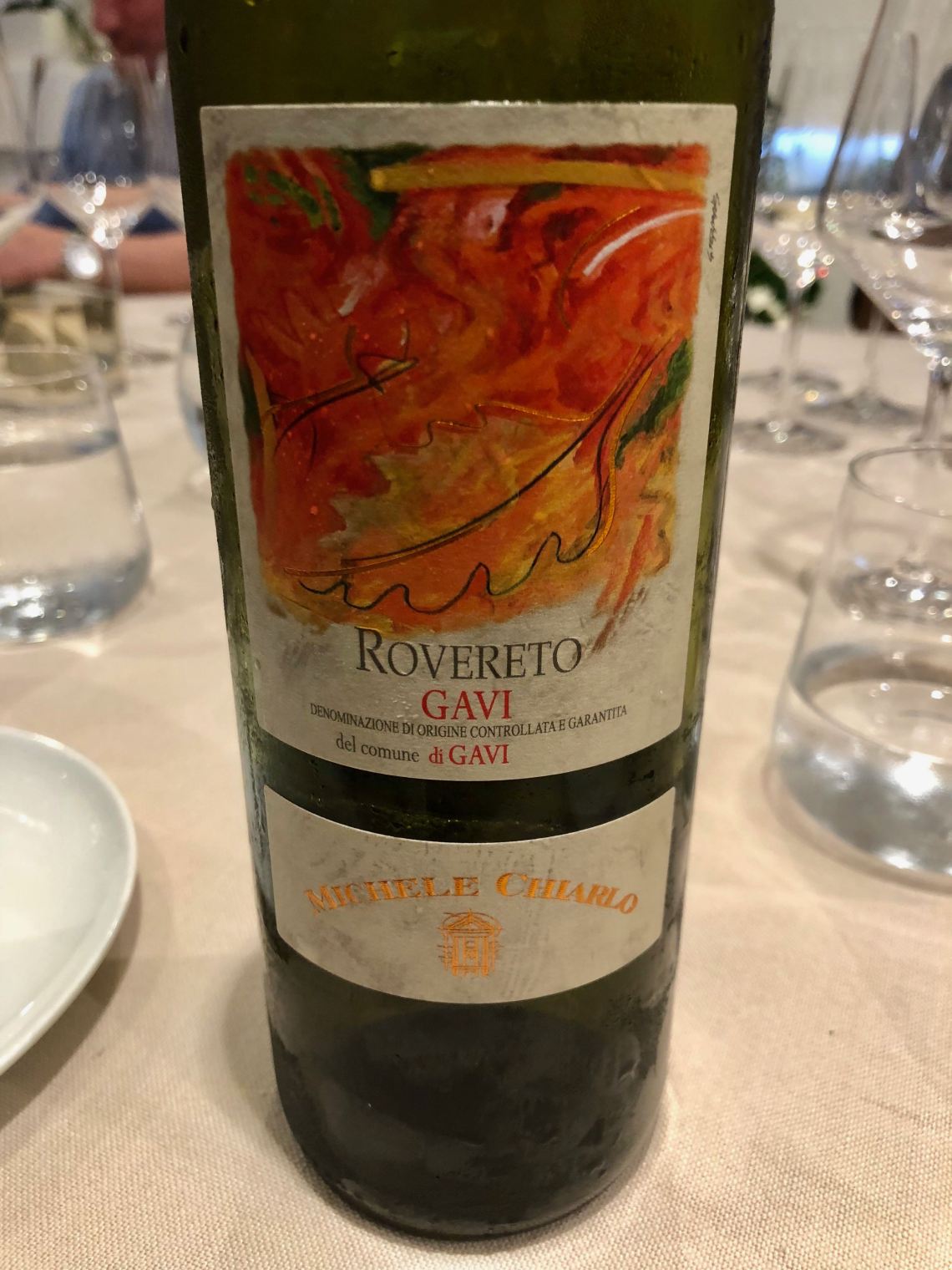 We had delicious plin ravioli with 3 meats and then veal with figs which were growing on the trees everywhere. 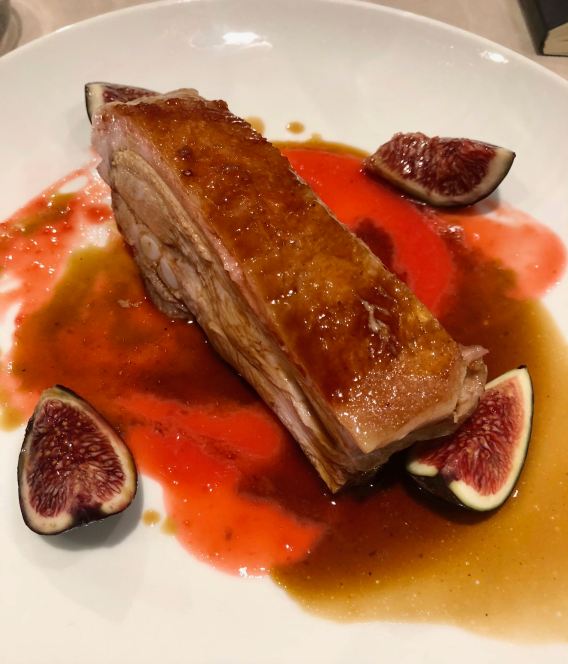 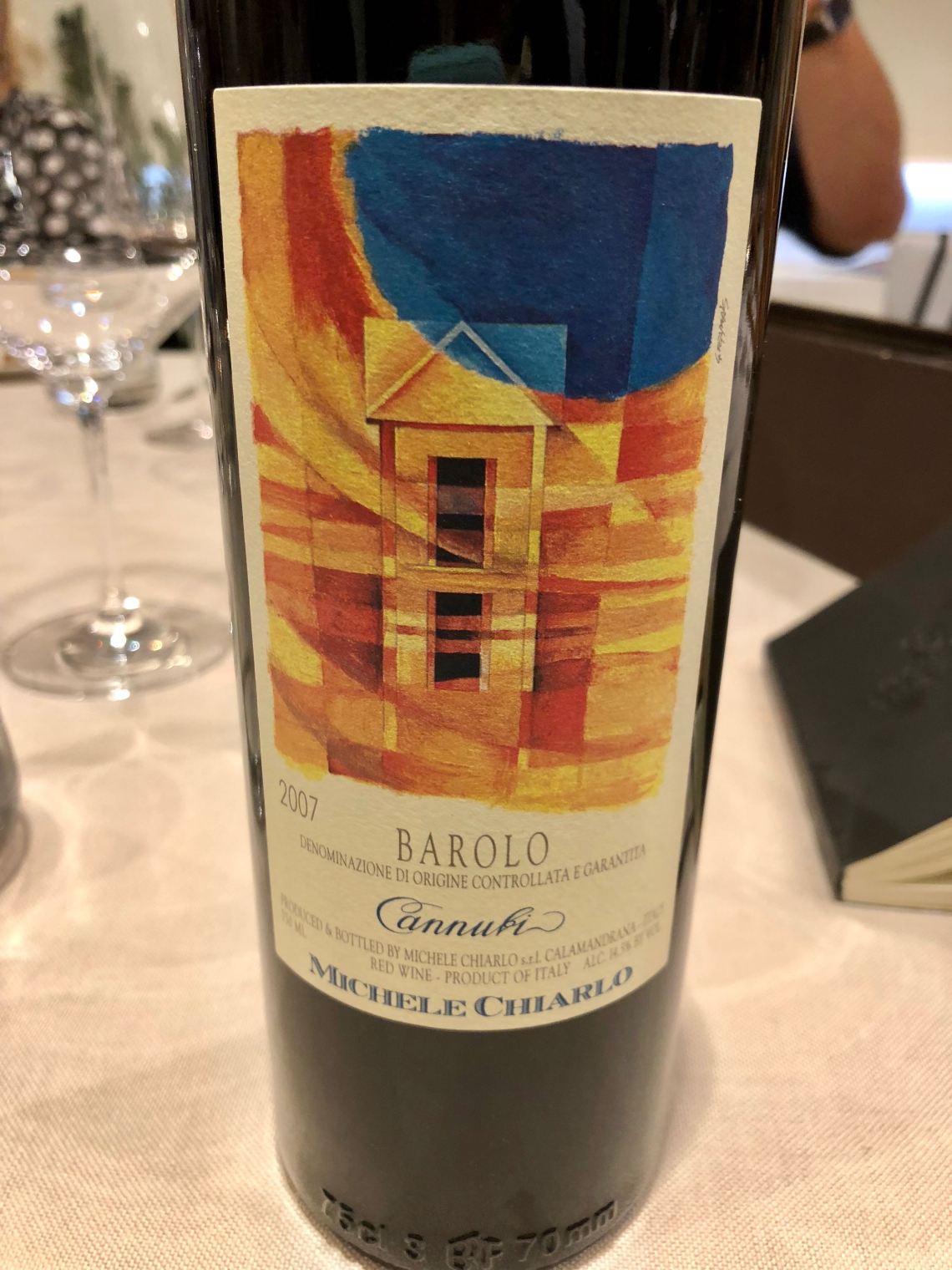 Michele Chiarlo Barolo Cannubi 2007  It was a wonderful visit with this illustrious wine family at their spectacular resort. We all left very “Barolo happy”. I felt like I was in Barolo heaven. Very good times always happen when it involves great people and delicious wines and food. Thank you to the Chiarlo family for an incredible evening!!! 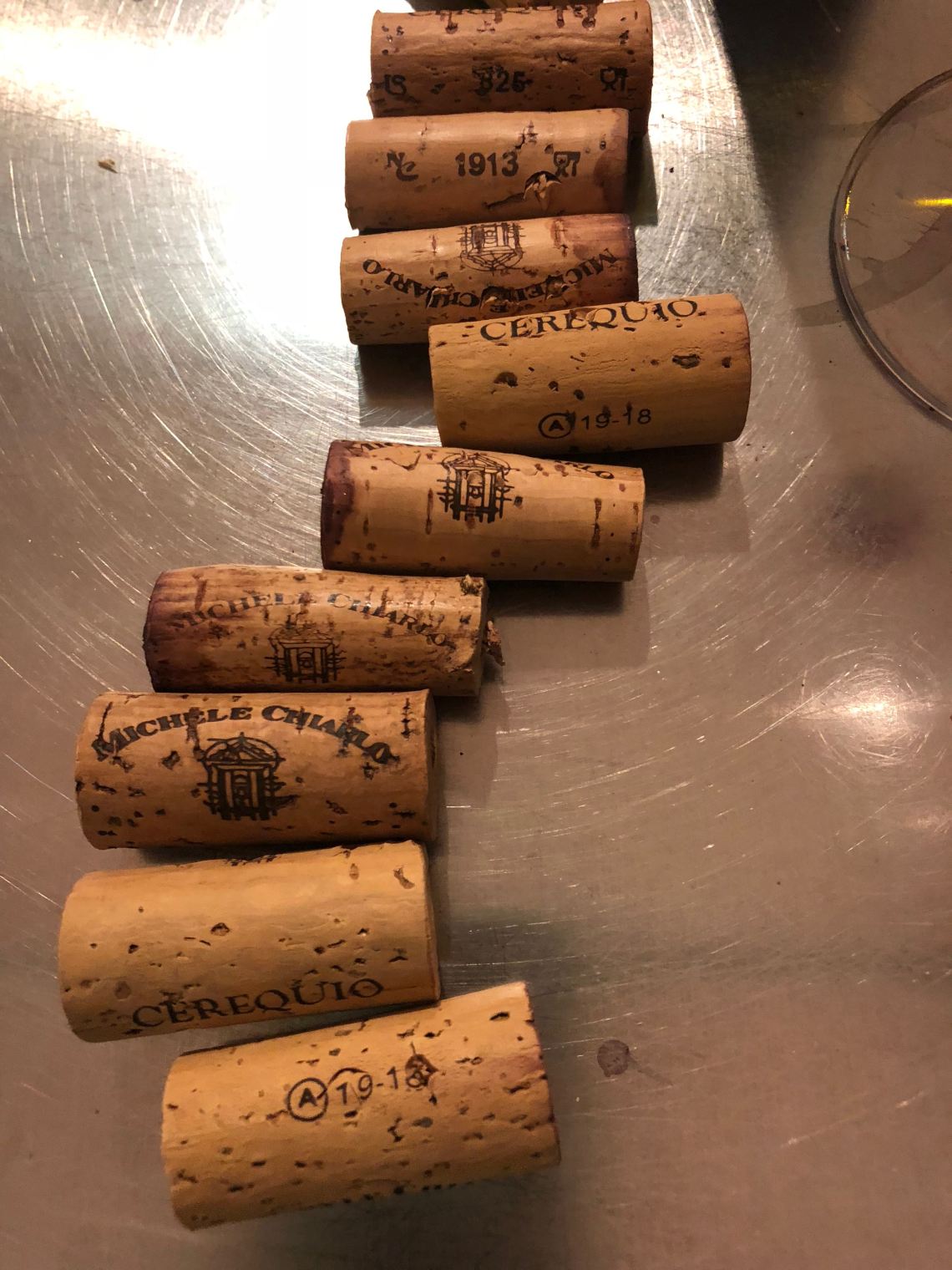