The 2017 Bon Appétit Chicago Gourmet Food and Wine Festival took place last week, September 19-24. The theme was “DECADENCE” in honor of their 10th anniversary and decadent it was!!! The festival has grown so much that you actually need to morph into 2 or 3 people to be able to take part in everything and taste all the delicious food.

For example, this was one, very delicious bite, from Chef Ian Davis, Band of Bohemia. It was smoked sturgeon on sourdough toast with egg yolk custard and peach-bourbon jam. This was one bite from Tasting Pavillon 9, Who’s Hungry that included as well as Band of Bohemia, Mama’s Boy Peasant Italian from Rosebud Restaurants (tronchetto), Bernie’s Lunch & Supper (Lamb Hashwi) , The Signature Room and Imperial Lamian serving from 12:00pm – 2:30pm. 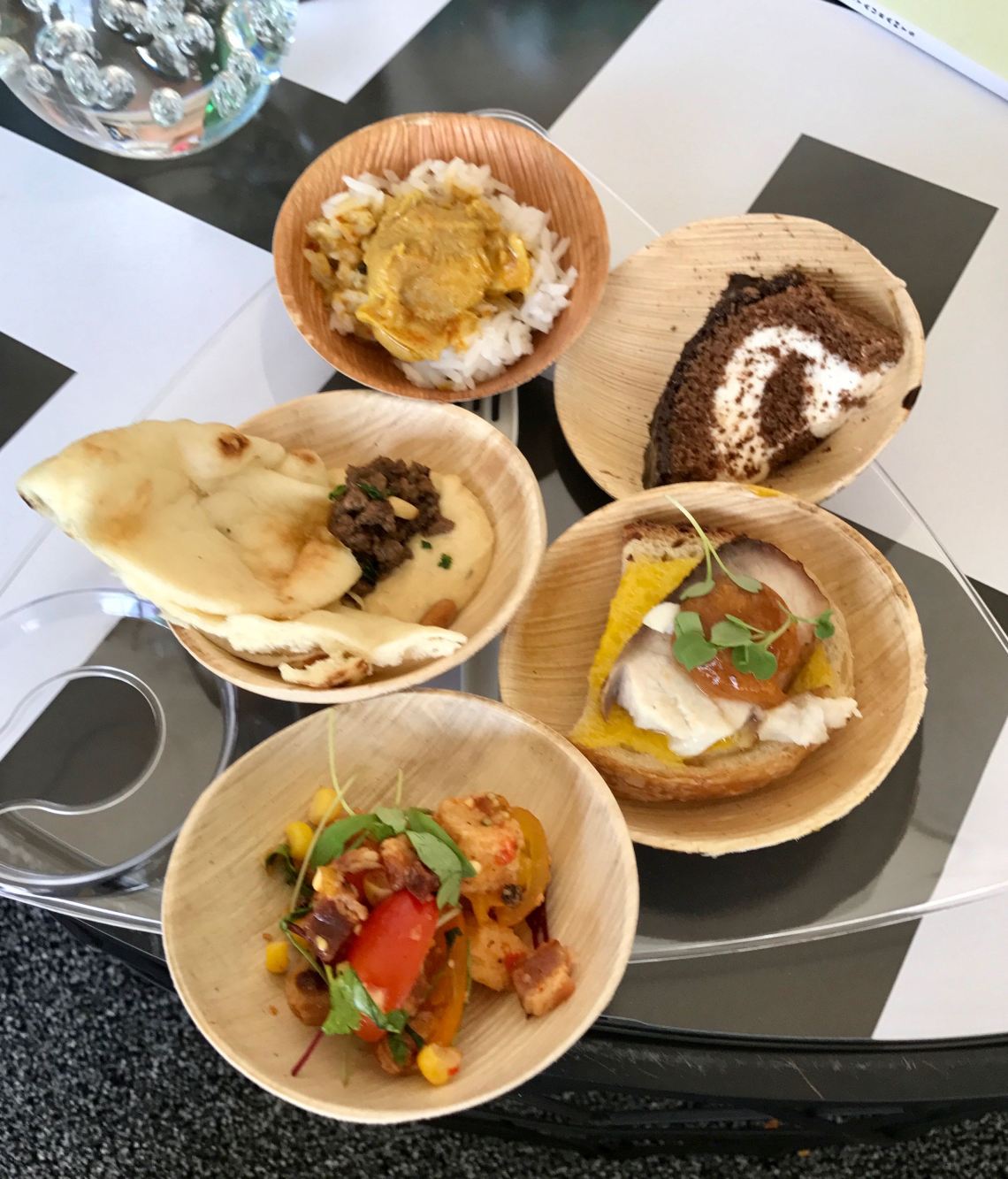 This was what my tray looked like after one pass. So you get the idea of the variety and amount of food. The fun thing at an event like this if you are strategic is that you can try food from many restaurants that you might have been curious about. There were 11 major pavilions serving food from multiple restaurants at the same time and there would be another round from 3:30pm – 6pm, so it truly was a food extravaganza.

This year the event had a definite international flair with a Mexico booth highlighting top Mexican chefs and a Japan tent where they were raffling off a roundtrip to Tokyo if you took your picture in front of the Tokyo sign and then posted to social media.

The wine, what about the wine? Well besides the incredible food, one of my favorite parts of the event are the wine seminars that go on (I consider them wine gems) and the people that lead them are the legends and top dogs of their specialties. They have 2 tracks, one group held in the Choral Room (focused on wine) inside the Millenium Park stage and one outside right next to it on the East Lawn under a tent focused on spirits and beer.  The Choral Room fit 48 people so those  “experienced” CG goers knew to get in line about half an hour before the seminar in order to get a seat. I will say, waiting in line is not so bad, because for me it gave me a chance to get caught up on social media, to give my stomach a break and to leaf through the very informative pamphlet to strategize what my plan was for the rest of the day.

Did I mention that besides the seminars going on, there are Live Cooking Demos by top chefs happening on the stage as well as all the pavillons serving food and the wine promenade in the middle of the field.

The first seminar I went to was “Exploring Burgundy and the Whole Cru” given by Fred Dame MS and Guy Stout, MS, CWE. Both are from Southern Glazer Wine & Spirits who were the sponsors of all the seminars. At the same time, “Agave Spirits, Get In the Mix” was being held on the East Lawn. You may recognize Fred Dame from the the movie, Somm, where he is one of the overseers of the exam. 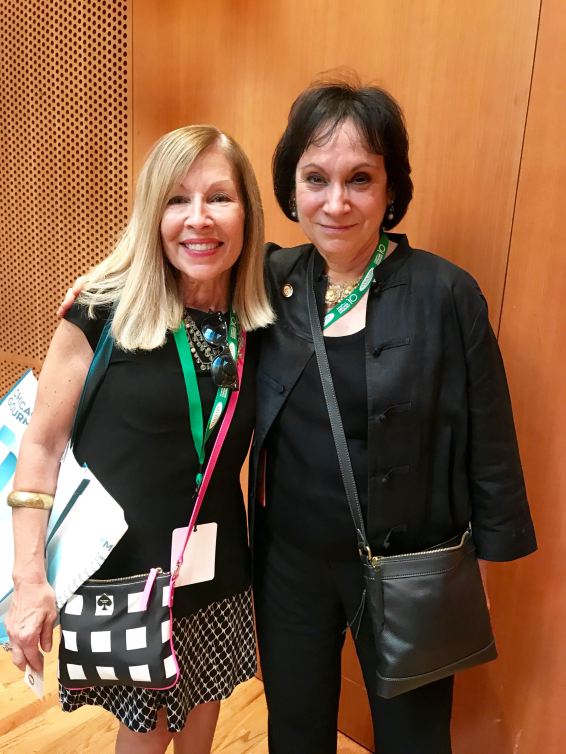 Above, Guy Stout, Fred Dame, Cindy Rynning (a wine writer friend) next to Madeline Triffon ,who was leading the next seminar and who was the first American woman to pass the Master Sommelier exam, the ninth American and only the second woman in the world at the time. Madeline now runs the beverage program at Plum Market. It is truly a pleasure and a treat to have such well known Master Sommeliers lead the seminars. Guy and Fred were a comedy team and kept us entertained and laughing the entire time while sipping premier crus and grand crus. There was no snoozing in their room. They didn’t dumb down the material because they were speaking to consumers but they made it approachable, fun yet informative and the information was applicable to newbies to Burgundy wines as well as to collectors. It is a great way to get an introduction to the wines as well as to learn a thing or two. 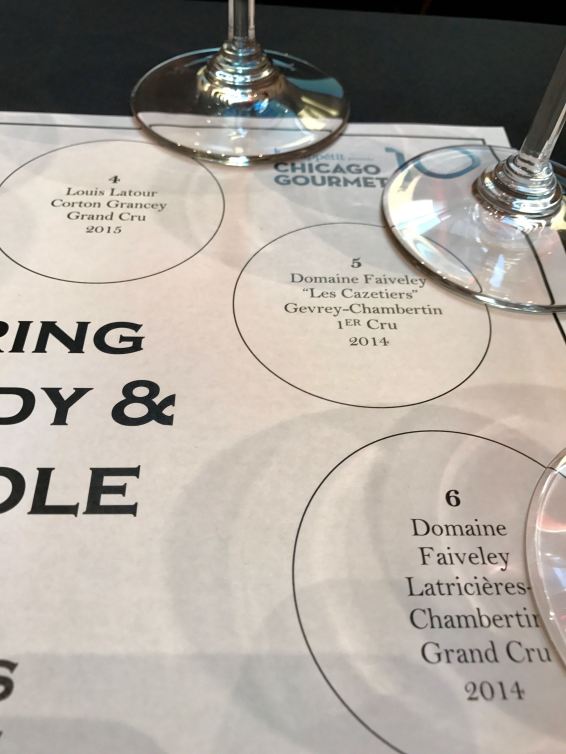 We covered George DuBoeuf Beaujolais (even though Beaujolais isn’t officially part of Burgundy anymore but unofficially it kind of is), Louis Latour Cortons and Faiveley Gevrey Chambertins. We moved from south to north through Burgundy and it was a great cross section of wines highlighting the differences of the Burgundy terroir. All the producers are historic domains with high quality wines and available within the US. As Fred said, we were “drinking history” and getting a “taste of place”. The wines were not cheap with the Grand Crus going for hundreds of dollars.  Nothing beats sipping a Grand Cru Burgundy on a September afternoon.

The other seminar that I attended was fantastic, another wine gem and held at the end of the day, “2008 Vintage, Where Are They Now?” given by Serafin Alverado, MS and Eric Entrekin, MS both of Southern Glazer. 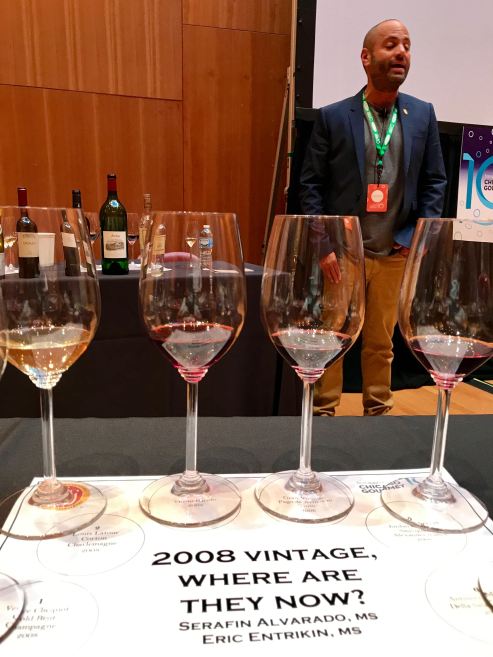 The flight included all 2008 in honor of the 10th anniversary, Veuve Clicquot Gold Brut Champagne, Louis Latour Corton Charlemagne, Dosio Barolo, Gran Vino de Pago de Arínzano Tinto, Jordon Cabernet Sauvignon, Alexander Valley poured out of a magnum and Antinori “Muffato Della Sala”, Umbria. Unless you collect aka “laydown” wine and store it appropriately or have generous friends, it is highly unusual to be able to taste 10 year old wines. Serafin and Eric showed what diversity there is when it comes to wine’s ability to age and most of these wines could still age even longer. This seminar was a very, very rare wine opportunity! It was a great way to end an incredible food and wine day!

Did I say the 2 seminars I described above were just 2 of 4 other wine seminars that were held that day? The other 2 were, “International Icons- A Blind Tasting Seminar Featuring Six World Class Bordeaux Blends” given by Eric Hemer, CWE, MS, and MW of Southern Glazer and Peter Marks, MW,  Constellation Brands and “Rosé, Its Here to Stay” by Madeline Triffon, MS, Plum Market and Brian Bauer, CWE, CSS, Southern Glazer.

The East Lawn Seminars included besides Agave, “The Power of the Punch” sponsored by Beam Suntory “, “Beer Got Your Tongue: Culinary Brewing and Pairing Beer with Food” given by Jared Rouben Brewmaster of Moody Tongue, and the final one, “The Road to Being a Master Sommelier” that included Fred Dame, Guy Stout, Madeline Triffon and emceed by Steve Dolinsky, the Hungry Hound of ABC7.

It was my wine lucky day because when I arrived I found out that I had a pass to the Grand Cru Tasting (2-4pm) on the Harris Rooftop Theater as well which is a very decadent showing of luxury wine after luxury wine poured by some of the top Chicago sommeliers in the city and accompanied by food from some of the restaurants on the “Hot List”.

Below are pictures because this event but the capital “D” in decadent! 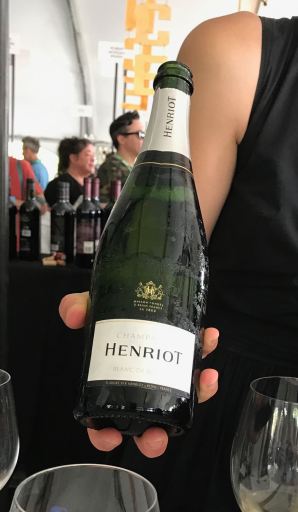 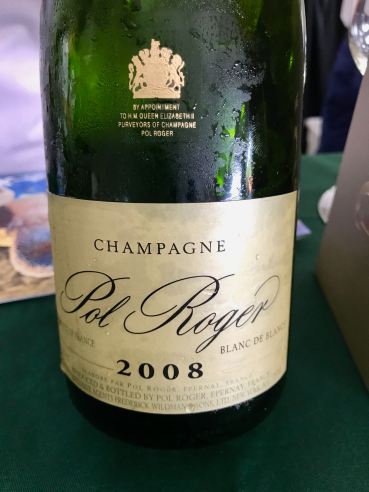 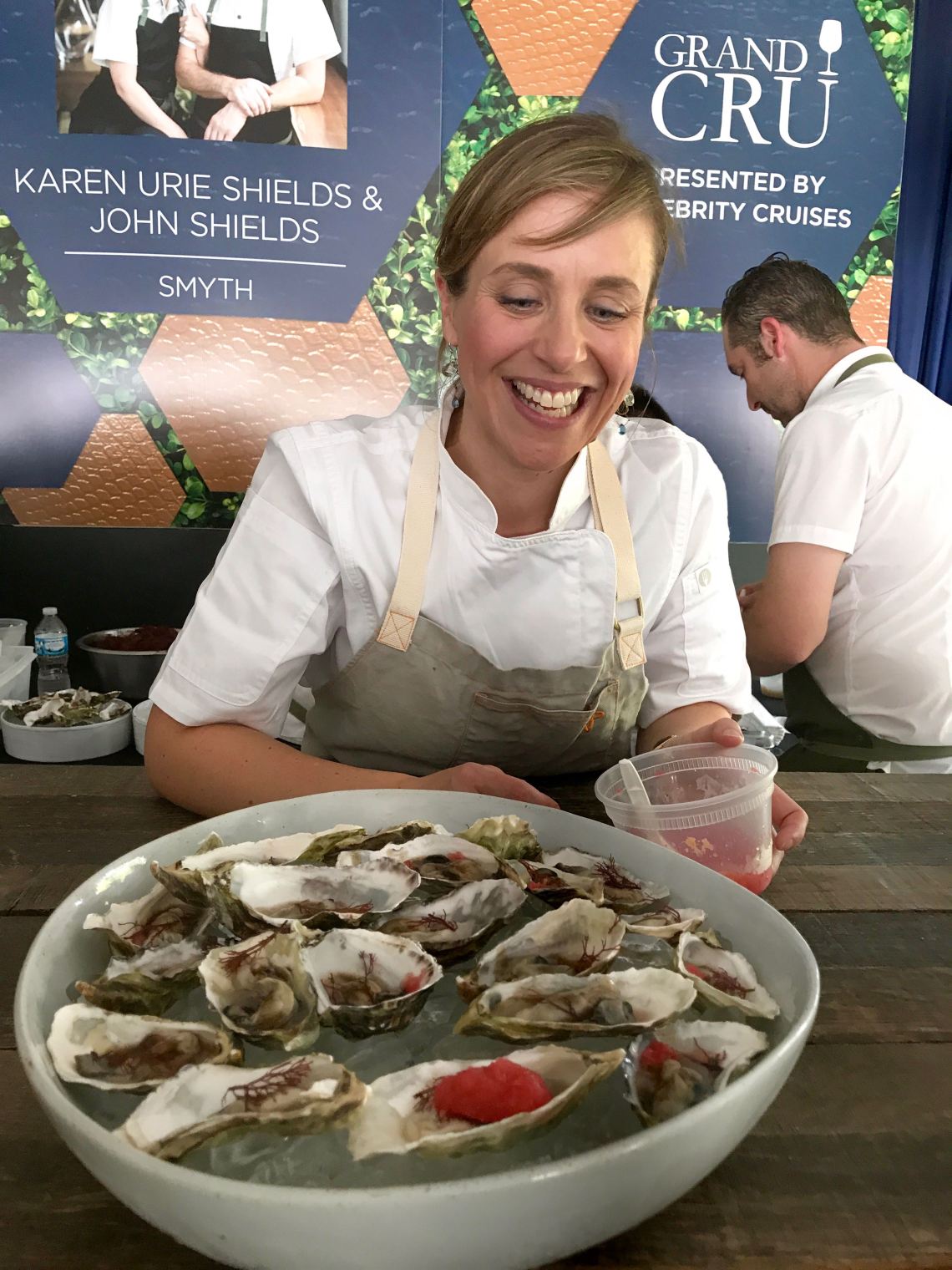 I don’t know how I missed Chef Tony Priolo’s Carolina Gold, Anson Mills Carolina Gold Rice, Duck Egg, Parmigniano Reggiano and Australia Winter Truffle of Piccolo Sogno, a restaurant that I love. I ,also, missed Chef John Manion’s La Sirena Clandestina, Salted Green Papaya, Green Papaya, Basil, Miatake Mushroom & Passion Fruit. There is a point within the Harris Rooftop and it was a hot day, that with a small pour of a vintage Champagne I just went to one of the couches and sat and enjoyed the beautiful setting, people and food. A warm haze envelopes you at the Grand Cru tasting and time seems to stop and I just had a thankful moment that I was able to partake in the event.

This long-winded narrative still does not cover the extravaganza that is Chicago Gourmet week. There truly is something for everyone and the wine seminars themselves are a reason to go. The ticket is not cheap but there is so much included that it pays for itself within the first hour. And somethings are priceless, like the 2008 wine seminar at the end of the day given by Serafin Alvarado or the comedy duo of Fred Dame and Guy Stout playing off one another during the Burgundy seminar. This was a super stellar 10th Chicago Gourmet and I already can’t wait for the one next year! 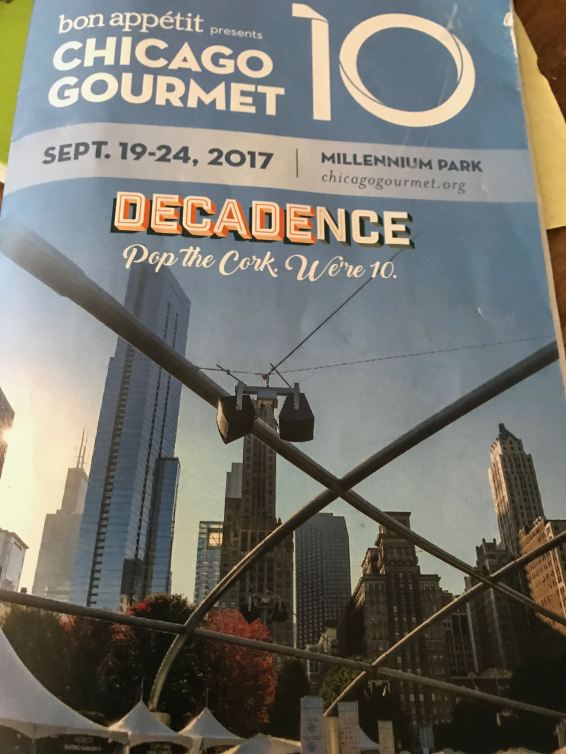