I have been stalling writing my final posts on the Wine Scholar Guild Alsace trip.  When I finish the posts, it means the trip is truly over.  Stalling gives me a chance to continue to go over my pictures and think of this very green region.  Fortunately, with the Tour de France going on right now, the telecast brings the vineyards and the countryside of France into my living room. As an aside, watching the Tour is actually a tour of the vineyards of France and a great way to figure out what region you’d like to visit.

I took my own advice for this trip and scheduled a couple of days in Strasbourg before the trip started and a few days at the end near Colmar. I was lucky to find a gem of a chateau (less per day than the costs of most hotels in Chicago) in Rouffach (20 minutes by car from Colmar), the Chateau d’Isenbourg . It was a much needed few days to walk the countryside after all the food and wine, time to assimilate the information and learn about another area of Alsace. 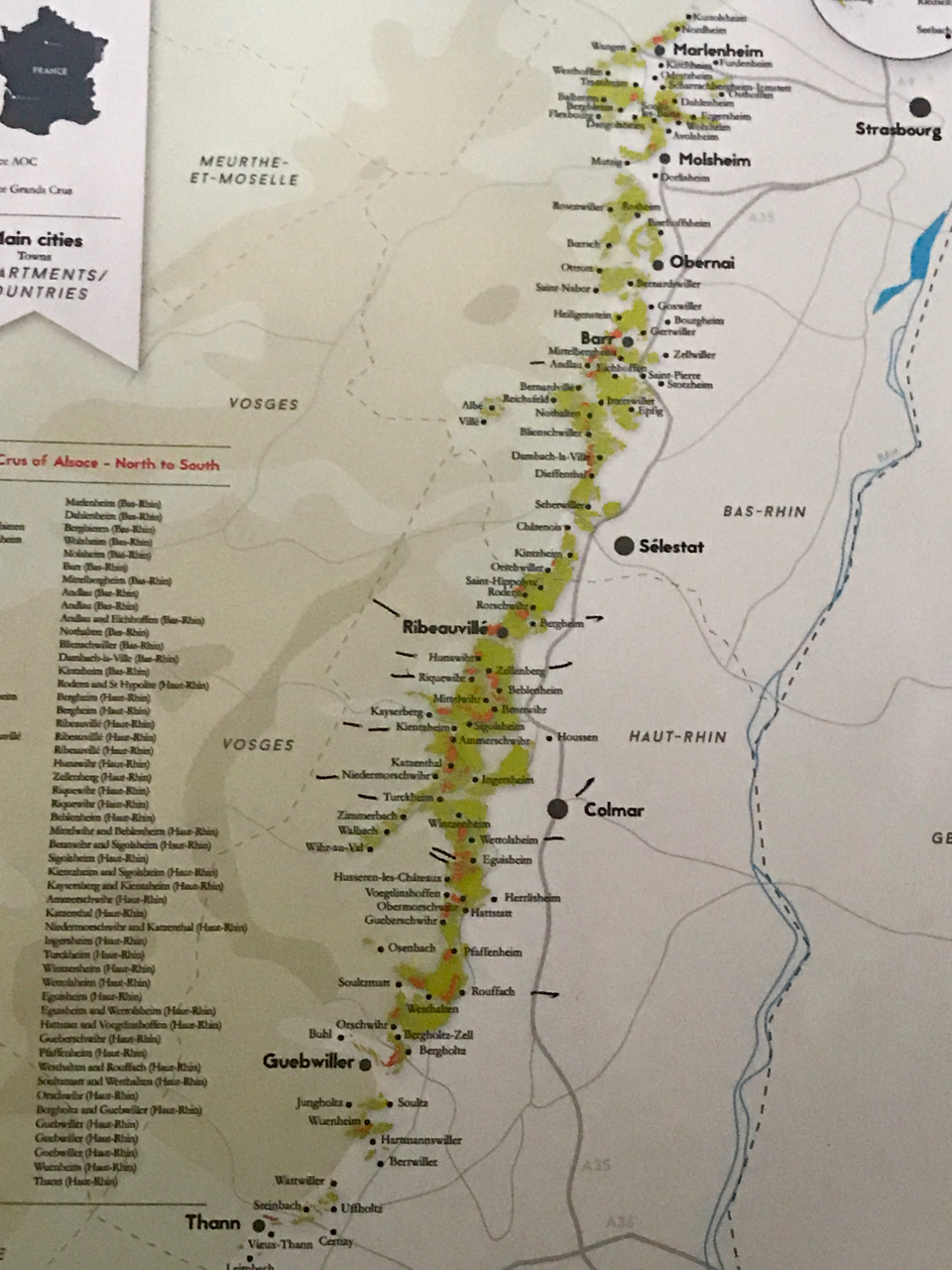 Rouffach is (just south of Colmar) relative to the towns we visited on the WSG trip. This map of towns and vineyards was included in the comprehensive trip packet handed out to all of us the first day. The trip began in the north in Strasbourg. Day 1 we headed south and visited Domaine des Maronniers in Andlau just south of Barr in the Bas-Rhin. The rest of the producers were located between Ribeauville and near Colmar in the Haut-Rhin. The Grand Cru vineyard names are different than the names of the towns, although the town name may be referenced in the full name of the Grand Cru.  So for example, the stony Grand Cru vineyard Rangen de Thann, the only volcanic soil vineyard in Alsace, is found in the far south in the town of Thann. 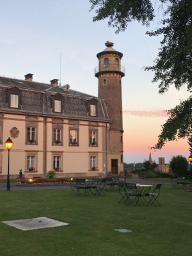 The Chateau D’Isenbourg is located right above Rouffach, with the Grand Cru Vorbourg (limestone and sandstone) vineyard rising behind. Vorberg is nested within the larger vineyards of the Alsace AOC Côte de Rouffach. A highly regarded wine maker, Domaine Mure is centered in Rouffach and known for their Grand Cru wines made from multiple terroirs in the area including Clos St Landelin and Grand Cru Vorberg including pinot noirs. Muré have a really good vineyard map on their website . The day I arrived I bicycled through the vineyards past the Clos St Landelin parcel to Muré’s tasting room which was about 20 minutes away from Rouffach (at my biking speed), closer to a town called Westhalten.  He was already sold out of  Clos Saint Landelin Pinot Noir. I did bring home a bottle of Clos Saint Landelin Riesling as well as a Cremant d’Alsace Grand Millesimé 2012. Sadly, my suitcase would only fit so many bottles. Note, the bottles did make it back to Chicago, the sticker “fragile” on my bag actually worked! 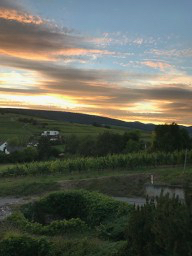 With such magnificent views of the vineyard and walking paths all over the hillside, it was quite easy to explore the land. When I see a hill I always want to climb to the top. I had not realized there are established walking trails all over Alsace. Here is a site that lists wine walks throughout the Grand Cru vineyards of Alsace. Alsace is a wine hiker’s paradise. 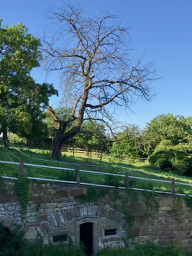 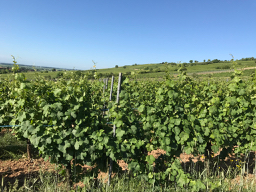 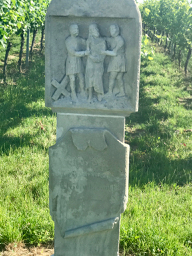 As I continued my walk, I kept going up and up the slope. I came across a religious stone which looked like it was part of a Stations of the Cross although I did not see any other stations in the vineyard. It was a reminder to me of how religion was tied to so closely to viticulture in the 16th and 17th century in Alsace similar to the monks impact on Burgundy. We saw crosses and other religious markers in many of the vineyards. 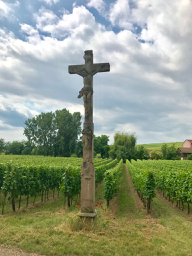 The Thirty Years War (1618-1648) was a huge conflict for power between Catholics and Protestants in Europe. One of the results of the war was King Louis XIV giving land grants to those willing to settle in Alsace and re-build France. Prior to the war the region had been under German control. The region would continue to swing between German and French control over the centuries due to more wars which is why I felt like I was in France and Germany at the same time. Today it seems there are still Protestant Valleys and Catholic Valleys, but of course, everyone gets along now. 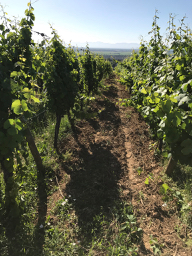 As I wandered up and up through the vineyard, I heard the whir of tiny tractors, running up and down the narrow rows, trimming the tops of the vines. When I reached the top of the slope I realized there were probably 5-6 different vignerons all hard at work hedging their small plots, I could not see them all but I could hear them. It had rained at the beginning of our trip and then sunshine. I think these conditions caused a growth spurt in the vines. All the vignerons we visited, particularly the small family ones, like Jean Boxler of Domaine Albert Boxler in Niedermorschwihr were late to meet with us because they needed to attend to the vines. 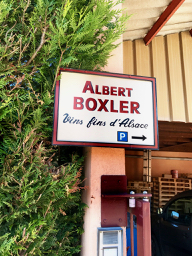 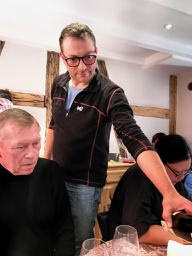 Our visit was rescheduled for late in the day to begin with at Boxler. When we arrived the very steep imposing slope of the granite Grand Cru Sommerberg was right behind the house. On the very top of the hillside, we could see a tractor madly going up and down the rows. I was holding my breath because the vineyard was so steep it seemed impossible for the tractor to avoid sliding down the hillside. Somehow it hung on the slope, moving up and down between the vines. We all thought we were going to see a crash, it was that steep, the tractor just seemed to defy gravity. Jean Boxler is very focused on his tractor and absolutely meticulous about his vines, grapes and wines and it showed when we tasted his exquisite, plot specific wines. 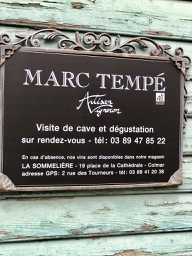 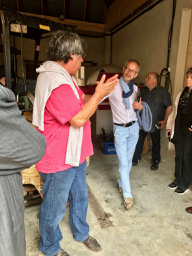 Another family vigneron who was delayed in the vines on our visit, was biodynamic producer Domaine Marc Tempé in Zellenberg. Marc needed to finish up work in the vineyard as well. The vines don’t wait for anything, they grow and these vignerons were focused on growing high quality, healthy grapes. Sommeliers say this, wine sellers say this, ” a wine is all about the vine” but in Alsace you really can see how such incredible attention to the vines grown on unique, healthy terroirs produces long aging, delicious wines. 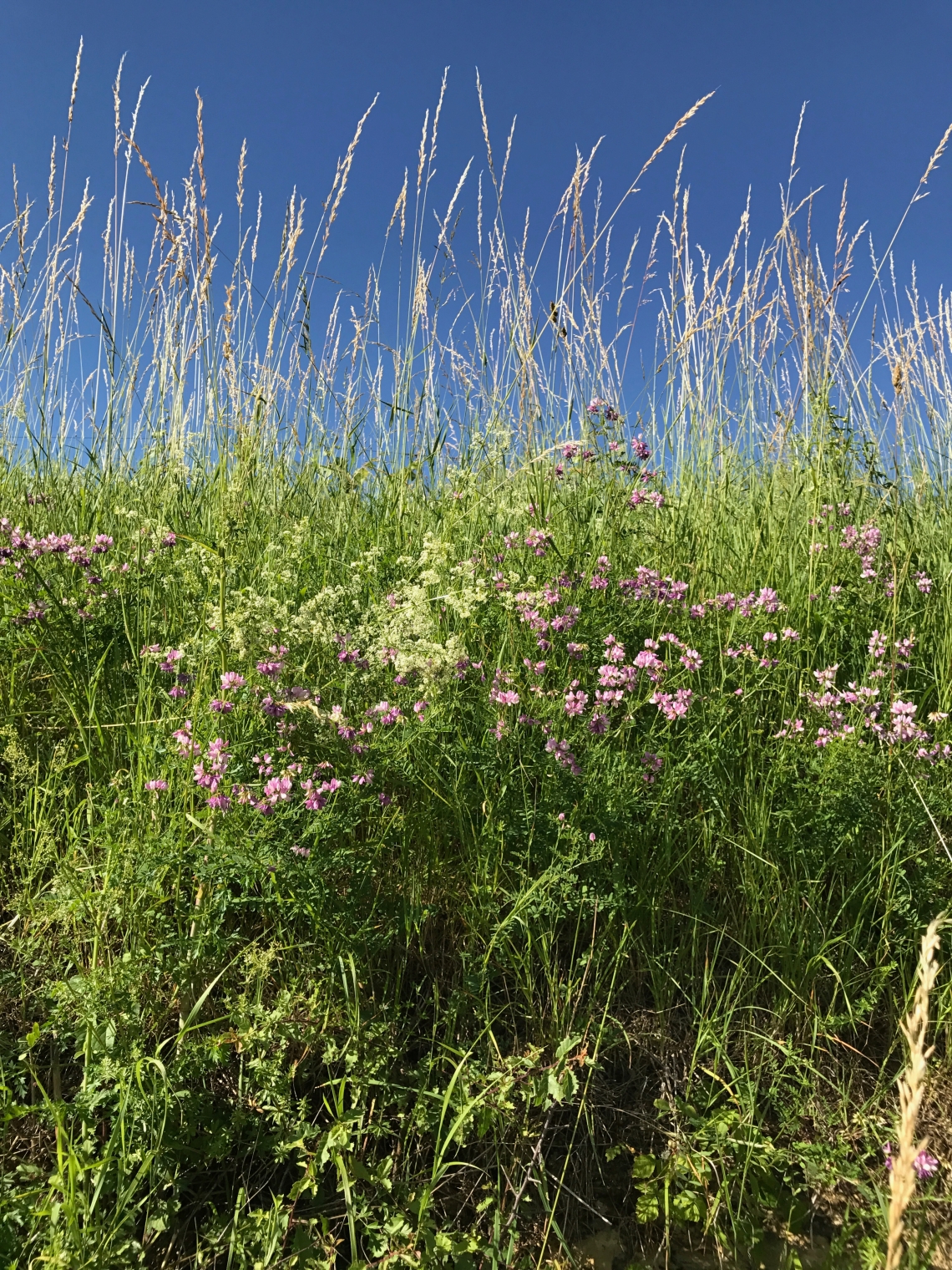 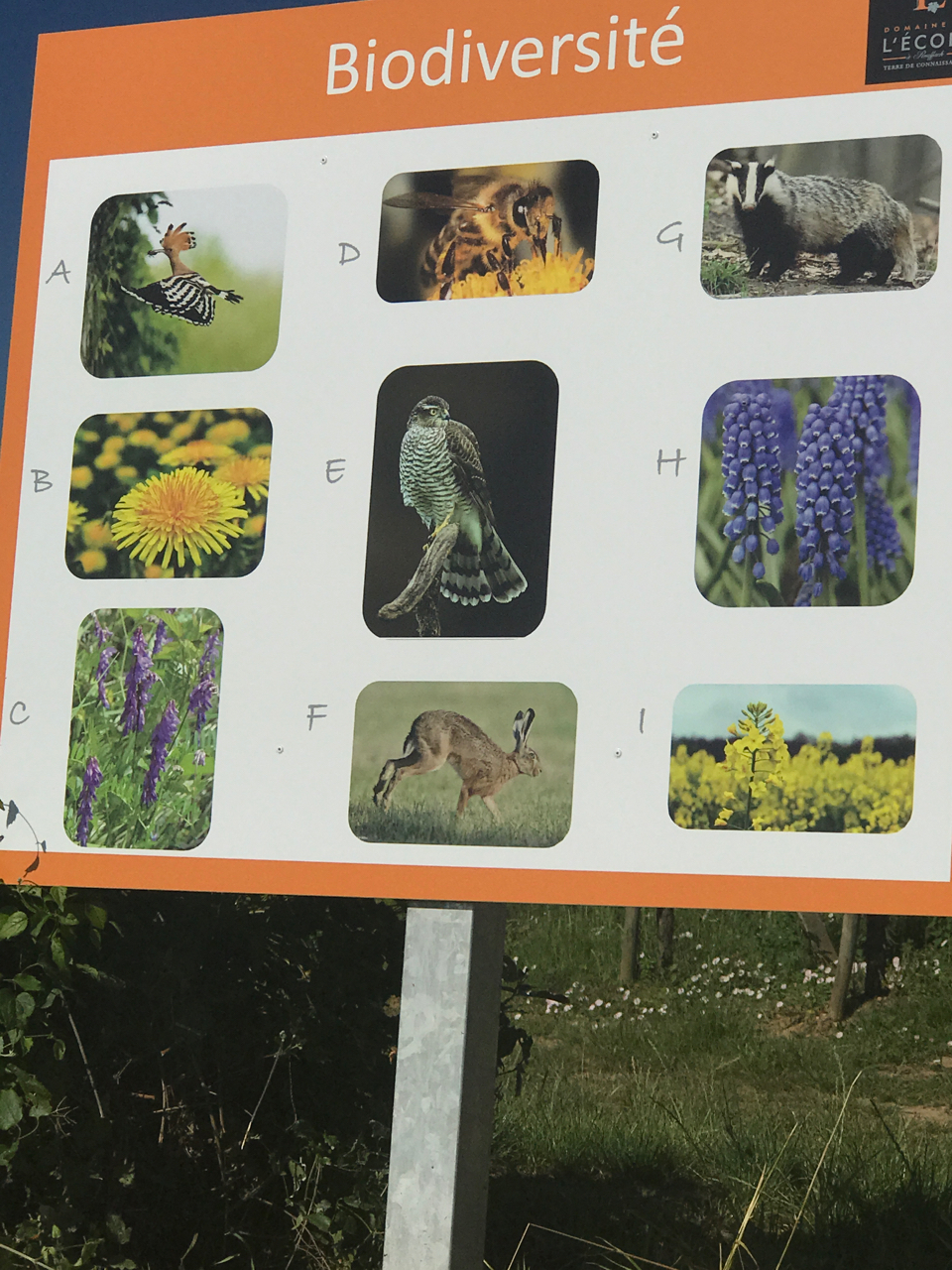 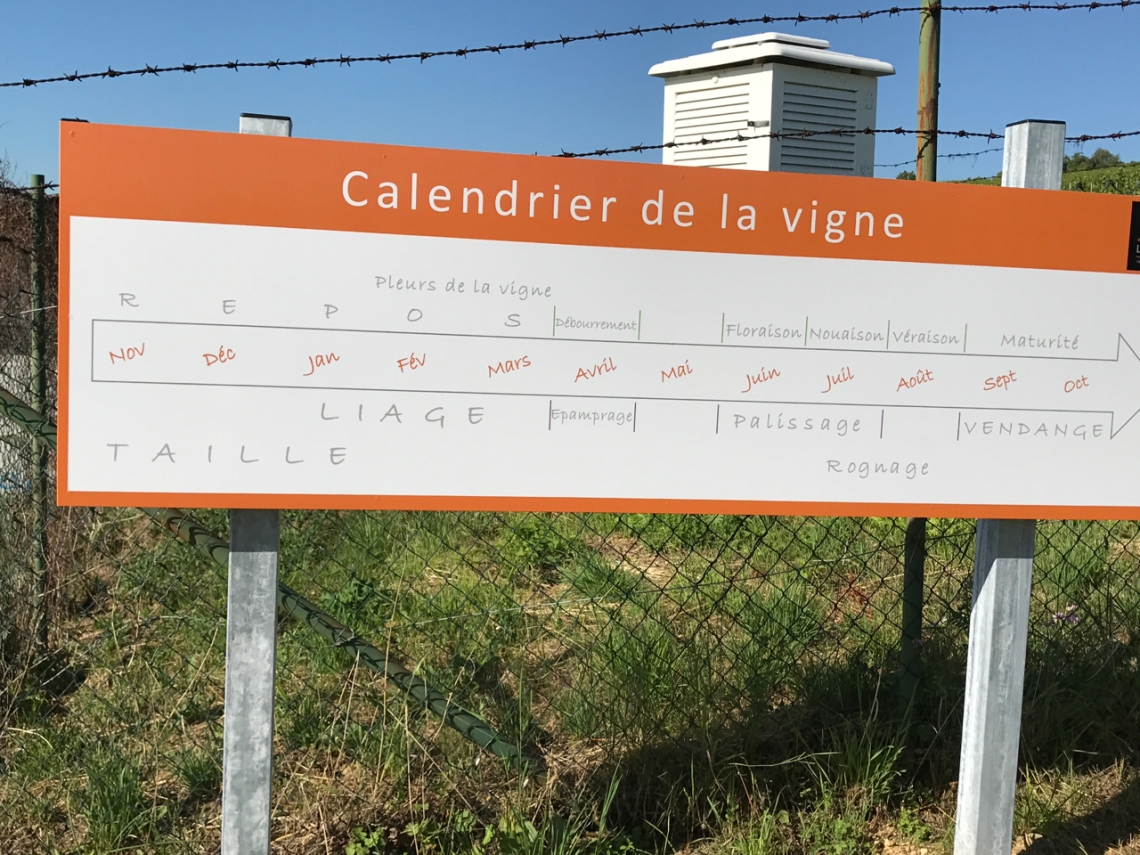 As I continued my walk, the slope of the hill came to a plateau and then continued higher. I came across these signs, signs I assumed that were used by the Lycée Vitcole de Rouffach. Pictures are a universal language. Biodiversity in the vineyard seemed to be a watchword in all the vineyards we visited. Alsace itself should be called the “green region” because everyone seemed to be hyper-aware about sustainability and practiced limited use of chemicals. Most vignerons were biodynamic or at least talked about minimal use of chemicals. Roses were traditionally planted at the head of a row to be a leading indicator of disease. But the roses I came across on my walk were incredibly vibrant. Wild flowers were everywhere. 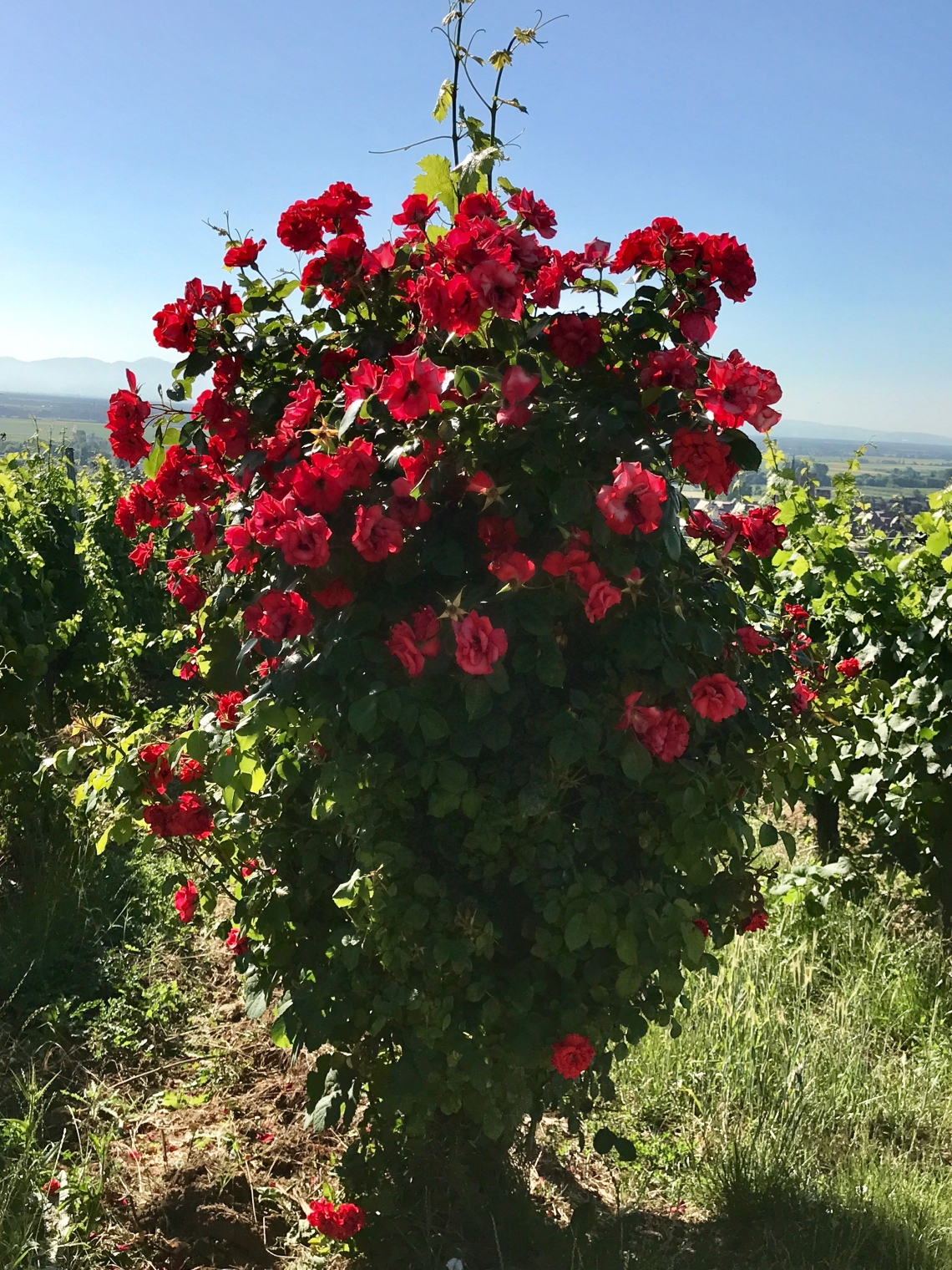 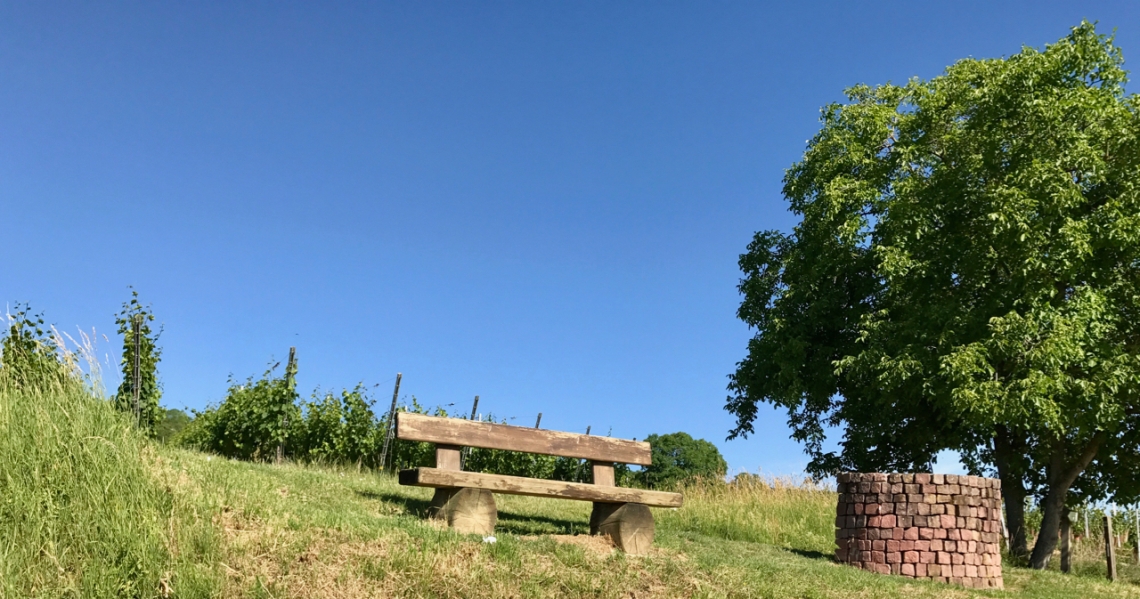 I reached the top of the first slope but the walking path continued to wind up the hill without a end in sight. When I came across this bench I took in the view as the vignerons worked hard in the fields. I heard the birds and the gentle breeze hitting the leaves on the trees feeling lucky that I was able to explore this beautiful land and region of Alsace.

A friend said there are no ugly wine regions and that is true. However, Alsace is particularly beautiful with the very green hills and storybook towns.  Whenever I open a bottle of Alsace wine I will remember this walk in Rouffach and the moments spent with winemakers on the WSG trip. 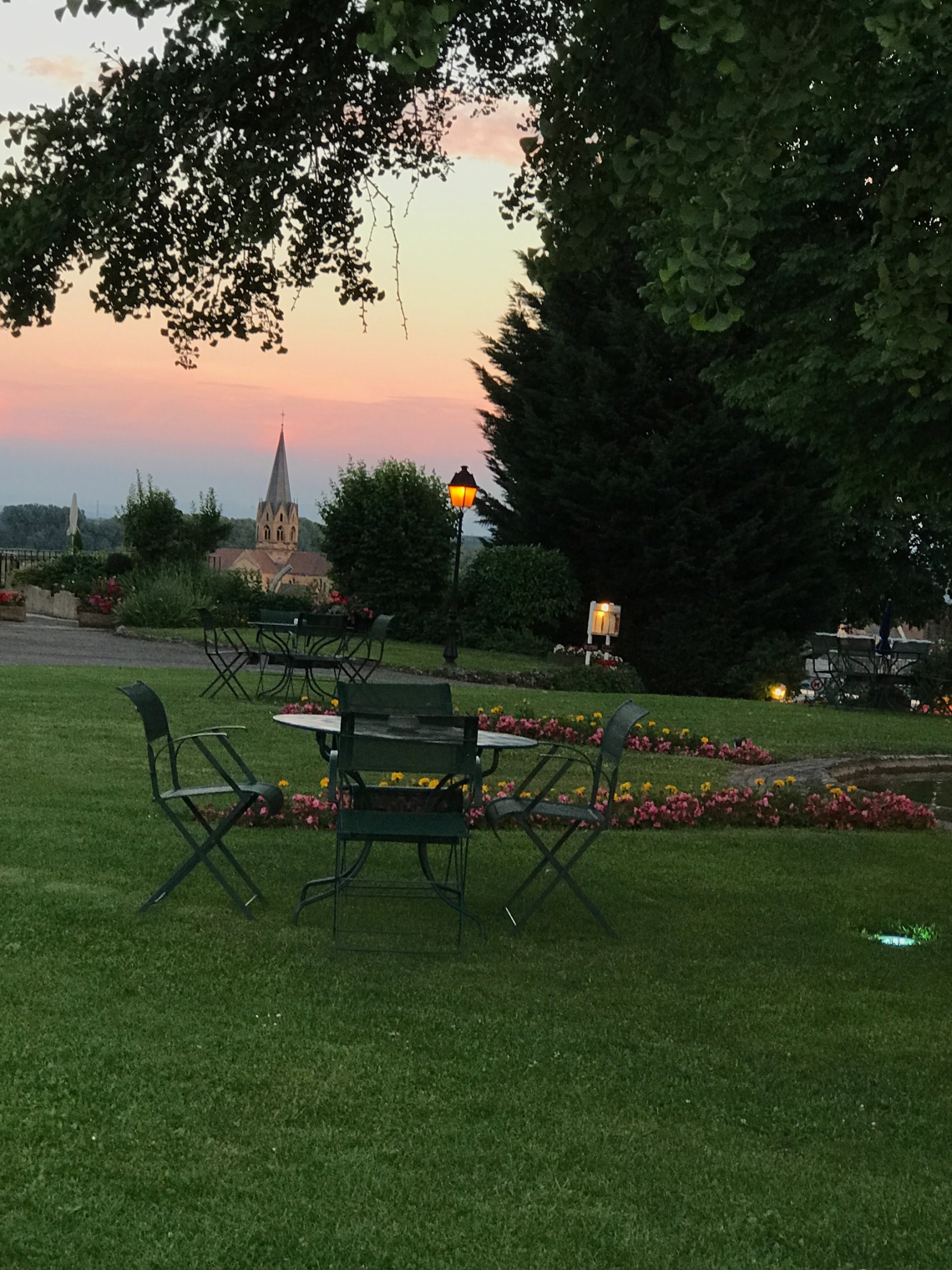