The picturesque medieval villages of Burgundy are beautiful. However, it can be a very overwhelming region when it comes to choosing a wine. Burgundy is the wine region that defines and exemplifies that elusive term terroir, a sense of place, in its wines. However, choosing a wine in the belly of the region, the Cote d’Or can be intimidating. Prices can be exorbitant, there is often unevenness of wines across vintages due to weather variation and the fragmentation of ownership makes for many producers. So how is one to pick a wine if you want to dive into the region and try a Burgundy? A négociant who owns land and buys from growers is a great way to go because of the consistency in quality of their wines and most have been in Burgundy for over a century and own top parcels and work with valued growers.

Frédéric Barnier, the Directeur Technique  (Winemaker) for the négociant, Maison Louis Jadot was in Chicago several weeks ago. As part of his visit, he lead a tasting at Binnys Lincoln Park. Out of that tasting I found 2 village level wines that I think reflect their specific terroir, have quality soil pedigree yet are a great value for a Burgundy wine in the heart of the Cote d’Or: Louis Jadot Pernand Vergelesses Clos de la Croix Pierre 2014, ($35.99 at Binnys) and Louis Jadot Savigny les Beaune Rouge 2014 (was $37.99 now $29.99 at Binnys), 2 of the value villages of Burgundy.

Jadot is the largest vineyard owner in the Cote d’Or. They bottle a lot of wine including 9 Cote de Beaune Grand Crus, including famed Corton Charlemagne (2014 $150 Binnys) and Montrachet (2013 $449.99 at K&L). Holdings include the parcel,  Chevalier-Montrachet Les Demoiselles Grand Cru (2010 $345 at Binnys), purchased in 1794, and of which Jadot is one of only two owners, and the monopole Beaune Premier Cru Clos des Ursules, a walled portion (or clos) of the Premier Cru Vines Franches  vineyard owned by the Jadot family since 1826.

In my opinion, wine shop owners and sommeliers seem to be of 2 camps, those that support and love big brands and those that support and love small, family grown, handcrafted wines that aren’t widely distributed. I contend there is a happy place in the middle, you just have to be informed on who to look for. Jadot may be a large producer but they ,also, have a ton of winemaking credibility and history in Burgundy. So I consider Jadot, a big brand given the number of wines they produce with a small producer’s attitude towards the production of their wines. They had the opportunity over the years to purchase top plots and align with growers on well known parcels for quality grapes. As Frédéric said in his introduction, he lets the grape and the terroir of each parcel (exposure, aspect, sunlight hours, elevation, topsoil composition, water availability, subsoil composition) do the talking in the wine.

I think Burgundy seems to be associated with purchasing for cellars and “birthday wines”for those who were astute enough to buy Burgundies in their 20’s or had the money to pay up for the year later on. Burgundies and big wallets are usually paired together with hundreds or even thousands of dollars which can be paid at auctions for a bottle, which works as an everyday wine if you are Johnny Depp. But within the nooks and crannies of the Cote d’Or  are 44 village wines that can be reflective of their terroir. Yet since they aren’t at the Grand Cru or Premier Cru level, they do not have the huge price tag and can be of great value. Jadot’s Pernand-Vergelesses Clos de la Croix Pierre and Savigny les Beaune are 2 of them.

The other issue in choosing a wine is the pronounciation of the name, which in Burgundy can be difficult if you don’t speak French. In fact the region is trying to switch to the french name  Bourgogne (boor-gawn-yuh) over the easy to pronounce American name Burgundy  as the preferred name. However, pronouncing Bourgogne as an American can be hard, it takes practice. Go to the link to hear how to pronounce, Pernand-Vergelesses (Pair-nahng Vair-zhuh-less) or you can use my nickname for test studying “putting on the glasses” and Savigny les Beaune (Sa-veen-yee-lay-Bone) (and I do not have a nickname for this town) fall into that category. If you are going to drink the wine part of the fun and pleasure for me is knowing how to pronounce the name.

Price can be an issue in Burgundy. The price someone will pay for every day drinking wine can vary depending on your income of course but for the most part I would put it in the $10-$20 range. Then there is the next price level in my book, occasion wines and you can scale upwards from there. But in Burgundy the price between everyday and occasion can rise in leaps and bounds and commas in the number depending on the specific wine.  You can purchase the regional appellation  Jadot Bourgogne Pinot Noir ($20) but those grapes are from all over Burgundy so you don’t get a true sense of site specific terroir. When you start focusing on the next level wine, villages, the wines can be made from all over the village or the wines can be made from site specific parcels as in these Jadot wines. Aloxe-Corton,  Pernand-Vergelesses and Savigny les Beaune are right next to one another in the middle of the Cote d’Or at the very northern end of the Cote de Beaune.

The hill of Corton is famous for its Grand Crus the red and white Corton and the white Corton-Charlemagne and Emperor Charlemagne‘s wine. The ancient Jurassic limestone soils are what makes the wine. The Grand Cru acreage is 230 acres and there are 28 climats (named parcels) within that. The vineyards of Pernand-Vergelesses lie on the southwest slope of the Corton Hill.

« Clos de la Croix de Pierre » is situated on the « En Caradeux (which is composed of Premier Cru parcels and village parcels)» area. The vineyard is facing East, not very far from the village. Soil is made of limestone and small stones on the surface. Fréderic elaborated that the wine is a blend of a premier cru plot and a village plot (planted recently in 2002) so the final wine is a village. Its name comes from a big cross made of stone at the entrance of the vineyard. The 2014 vintage was a good vintage for whites. The wine was fresh, ripe apple, stony, steely some would consider it a baby corton.

Savigny les Beaune is south of Pernand-Vergelesses and just north of Beaune. Most of the production is red. 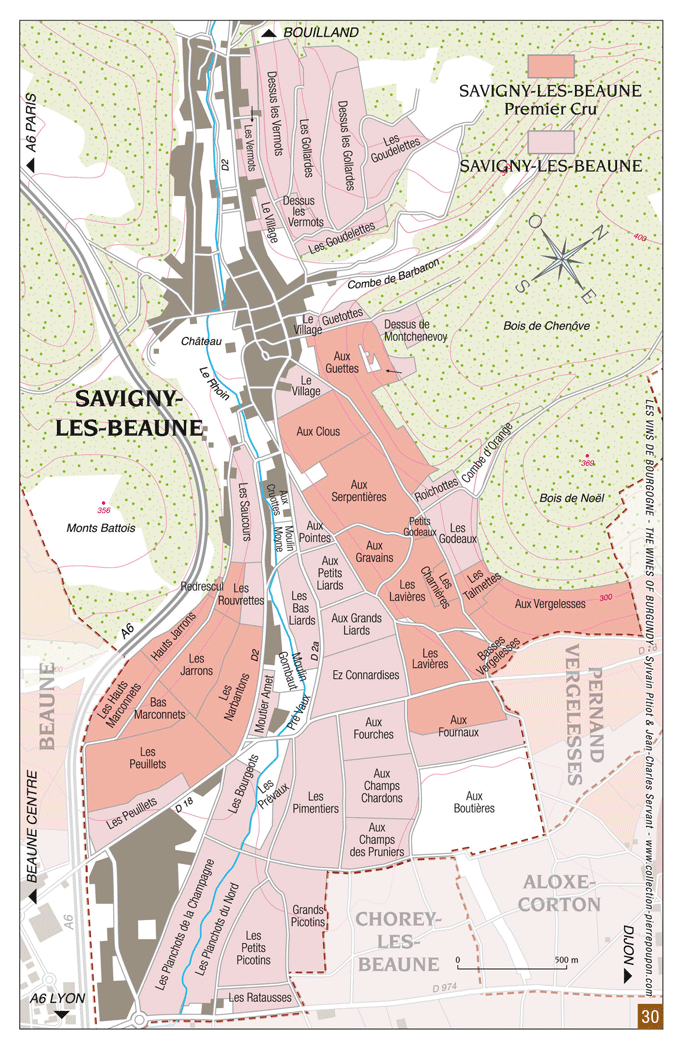 Fréderic specified that the grapes are sourced from the Vermots, Conardises and Champagne du Nord lieux dits, named plots. The wine has raspberry and cherry notes and more of a suppleness due to light tannins which is characteristic of the village. 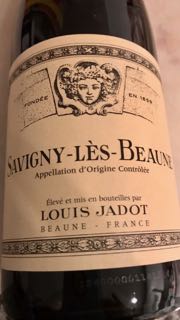 So here are 2 wines with very specific pedigrees and characteristics of place without the huge price tag. As a very wise Chicago wine seller has said, it never hurts giving wines like these a few years. You don’t have to turn into a collector but you can be an intermediate term accumulator. Then as you either move onto other villages or move to different producers within the same area, the fun is trying the wine on and seeing if you like it but not having to make a huge financial investment. Next time walking down the Burgundy aisle at a huge store like Binnys in Chicago it won’t be so intimidating and you will pick up a bottle and start tasting terroir. The fun is of course in the sipping!!