Natalia Cardenas, mixologist of Southern Wine and Spirits organized an educational session last Sunday on Pisco Porton and the history and specifications behind the Peruvian Pisco DO (Denomination of Origin). The event was held at City Winery lead by @PiscoJohnny, Johnny Schuler, the master distiller at Pisco Porton. Peru’s congress awarded him a Congressional Medal of Honor in 2007 for his work to increase the quality and popularity of Peruvian pisco. At 70, he is still going very strong and is very passionate about the Peruvian DO for Pisco and the elements and unique characteristics of artisanal Pisco, he loves his Pisco! He literally wrote the book on what artisanal Peruvian Pisco really is. As I learned there is pisco and then there is the real pisco.

One of the things I enjoy about studying wine and spirits is the history behind all things wine. Pisco Porton really recaps the history best on their website behind pisco. “Like all good things, pisco began as an act of rebellion. In 1641, the King of Spain—Philip IV—imposed heavy taxes on all wine produced in Peru. In response, his new world subjects dodged the onerous tax by distilling the year’s grape harvest. In hand-forged copper vats nearly four centuries ago, a new white spirit was born and christened pisco, a reference to the Port of Pisco from where this new spirit was exported and which means ‘bird’ in the indigenous Quechua language. To this day, Peruvians call it their native spirit.

Pisco can boast what only a handful of other spirits enjoy: a Denomination of Origin. This means, quite simply, that all pisco must be made in a specific region, Lima, Ica, Arequipa, Moqueqgua and Tacna.  and under the strictest of guidelines. All piscos are made in vineyards along the south western coast of Peru in fertile valleys amidst lands of sand and stone.” The valleys receive water from the Andes mountains through underground aquifers which enables them to grow grapes despite their lack of rain. 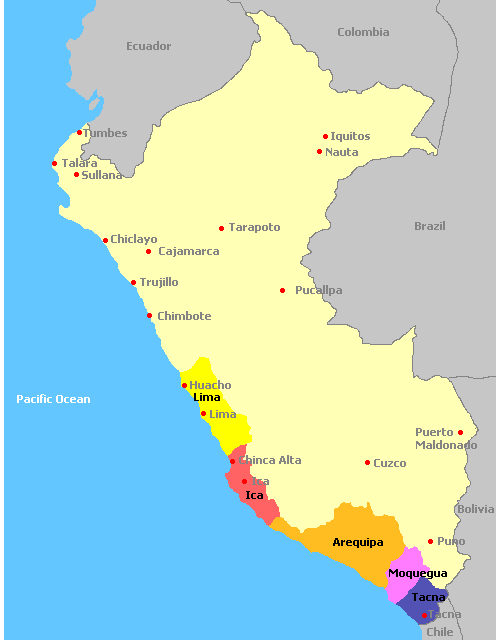 As an aside, my one time in Peru was spent hiking in the Cordillera Blanca, outside of Huaraz which is north of Lima and then returning to Lima, flying to Cuzco and taking the train to Machu Picchu. But that trip is a whole other story.

Getting back to the origins of Pisco, the grape growings regions as Johnny explained are these small fertile valleys set amid a bleak landscape and it is only because of the nearby mountains that the valleys have enough water to grow grapes. The port town of Pisco, is in the north of the Ica region. Nestled in the Ica Valley of Peru, amidst the foothills of the Andes, lies the oldest distillery in the Americas, Hacienda La Caravedo, established 1684 which is where Pisco Porton is produced.

One of the specifications of the DO is that the must be distilled from any of eight specific aromatic and non-aromatic grape varietals: Quebranta, Negra Corriente, Mollar, Italia, Muscat, Albilla, Torontel and Uvina. In its distillation, pisco must be made in small batches, crafted in traditional copper pot stills and left unaged or unaltered, meaning that not even water is added to the finished product. Pisco is distilled to proof, a rarity in a world where spirit makers distill to high alcohol levels and then add water to dilute to their desired proof. This single distillation of freshly fermented grapes is one of the specifications that makes it very unique in the spirits world. As mentioned, nothing can be added, no oak barrels, no water, no sugar. So real pisco is one of the purest liquors in the world.

As Johnny recounted the history of pisco, its rises and falls swayed with the boom and bust of economics. Amid the silver rush of the 1600’s, there was an abundance of grapes, the Spanish got concerned that Peruvian wine was encroaching on Spanish sales of wine, so the Spanish King taxed Peruvian wine, so the Peruvians made spirits out of the wine, one bottle of pisco is derived from the equivalent of 4 bottles of wine. During the 1850s gold rush in San Francisco, ships were the way of the world, Pisco traveled up the Pacific to become the famous Pisco Punch created by Duncan Nicol at a bar named Bank Exchange. Through the wars that took place in the 20th century, when cotton prices went up, they planted cotton instead of grapes, during Prohibition potatoes then afterwards went back to grapes. Finally, in 1991 the DO was established to protect good pisco from bad using 4 distinguishing factors, geography, the 5 growing areas mentioned, history, singularity in the way it is made and norms and controls, the 8 grapes. 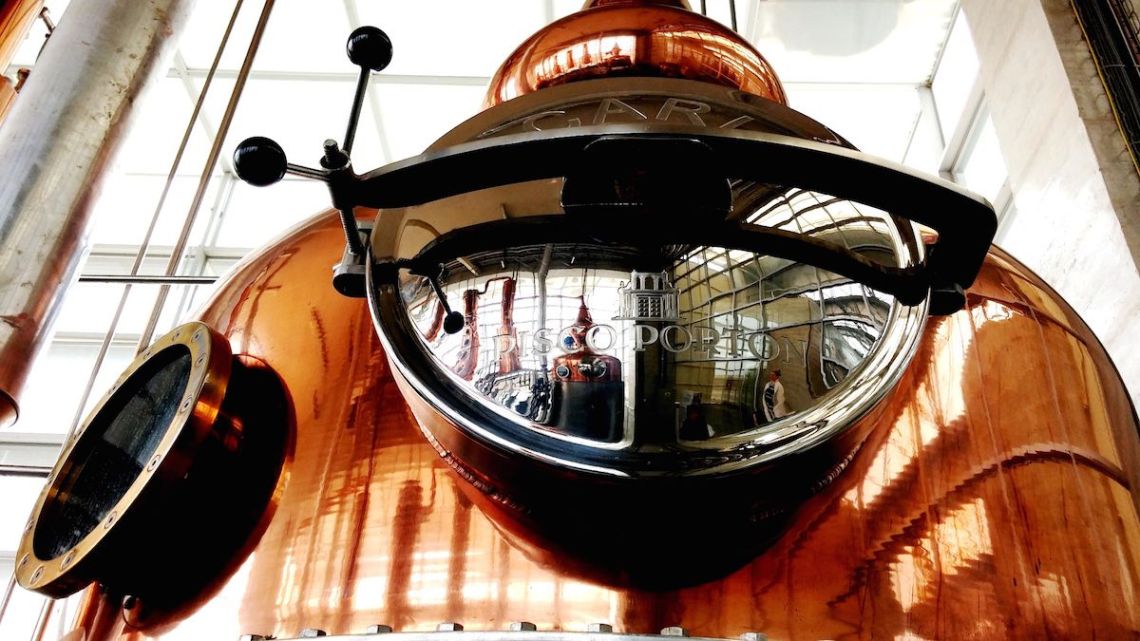 One of the requirements for the DO is the use of copper pot stills like the one above and only one distillation without much rectification so as to keep as much of the flavors as possible. There are 3 types of pisco, pisco puro (one variety), pisco acholado (a blend of varieties) and pisco mosto verde. This pisco is different due to it’s distillation process. To make Mosto Verde, the fermentation process is interrupted and then the juice is distilled. Normally, to make pisco, you let the fermentation process turn all the sugar content in the grape juice to alcohol. It takes more grapes to make Mosto Verde. The end product has even more flavor and more body.

We were able to taste Porton Puros that are not sold in the US and we tasted the lovely mosto verde. The aromas varied depending on the grape and the finish on all of them was very soft. The mosto verde in particular was smooth, aromatic and a velvety mouth feel. I admitted to Johnny that my first pisco sour was in Chile. However, after the seminar today I now understand why real Peruvian pisco is so special because of the standards to uphold and all the different steps involved and literally hands in the process of making it. But I decided that real pisco makes people happy like this picture of Natalia and Johnny.